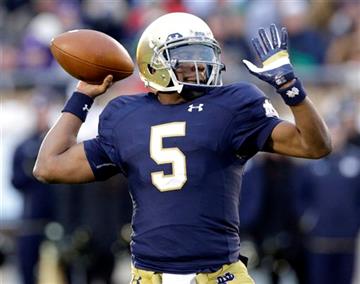 Former Notre Dame quarterback Everett Golson is transferring to Florida State, where he will have the chance to replace Jameis Winston.

Golson said in a statement to Fox Sports on Tuesday he will spend his fifth year of eligibility with the Seminoles. Golson graduated from Notre Dame on Sunday and will be immediately eligible to play under NCAA graduate transfer rules.

He immediately becomes the most accomplished quarterback on Florida State’s roster, with Winston gone to the NFL as the first pick in the draft.

“The support I’ve received there (Notre Dame) over the past four years has helped strengthen my integrity, wisdom and character,” Golson told the network.

“I would like to thank all of the coaches who spent time speaking with me these past few weeks and considered adding me to their football programs,” Golson said. “To coach Jimbo Fisher, the Florida State football team, staff, alumni and fans, thank you for allowing me to become part of the Seminoles family. I can’t wait to get started.”

Sean Maguire, a junior who started one game as Winston’s backup last season, finished spring practice as the Seminoles’ No. 1 quarterback.

As a redshirt freshman and first-year starter in 2012, Golson helped Notre Dame reach the BCS championship game. He missed the 2013 season because of an academic violation, but returned to Notre Dame last season and threw for 3,445 yards.

Golson threw 29 touchdown passes and ran for eight touchdowns, but also committed 22 turnovers in 2014. The mistakes cost Golson the starting job. Malik Zaire started the Music City Bowl. Golson played in the Fighting Irish’s 31-28 postseason victory against LSU, but it was in more of a supporting role to Zaire.

The two competed for the job during spring practice for Notre Dame and coach Brian Kelly never did declare a winner. Golson made the choice for him by deciding to play his last season somewhere else.

Golson, a South Carolina native, eyed several teams from the South and started a school tour in Tallahassee, Florida, last week before moving on to a couple Southeastern Conference campuses. He hit Gainesville, Florida, to check out the Gators and Athens, Georgia, to visit the Bulldogs.

But getting into an SEC school was going to be extremely complicated. The SEC has a rule prohibiting its schools from taking graduate transfers who have had significant disciplinary or eligibility issues. Golson was suspended by Notre Dame in 2013 for what he has called poor academic judgment.

The Atlantic Coast Conference has no such restrictions.

At Florida State, Golson joins a team that is retooling after going 27-1 with a BCS national championship and a playoff appearance the last two seasons. Winston led the way, winning the Heisman in 2013 and finishing with 7,964 yards and 65 touchdowns.

Winston and 10 of his teammates were selected in last month’s NFL draft, but the Seminoles are not without talent. Golson joins Dalvin Cook, who ran for 1,008 yards as a freshman in 2014, and three talented receivers (Jesus Wilson, Travis Rudolph and Ermon Lane), who combined for 93 catches and nine touchdowns last season.

Maguire won his only start last season, passing for 304 yards and a touchdown as Florida State rallied to beat Clemson 23-17 in overtime without the suspended Winston. Maguire is the only quarterback on Florida State’s roster who has played a college game.

The 6-foot-1 Golson will have to transition from Notre Dame’s spread offense to a more pro-style system at Florida State. Mostly, he’ll need to take better care of the ball — he threw 20 interceptions in 25 games at Notre Dame and last season lost eight fumbles.