Man who rested feet on desk in Pelosi’s office on Jan. 6 found guilty on 8 counts 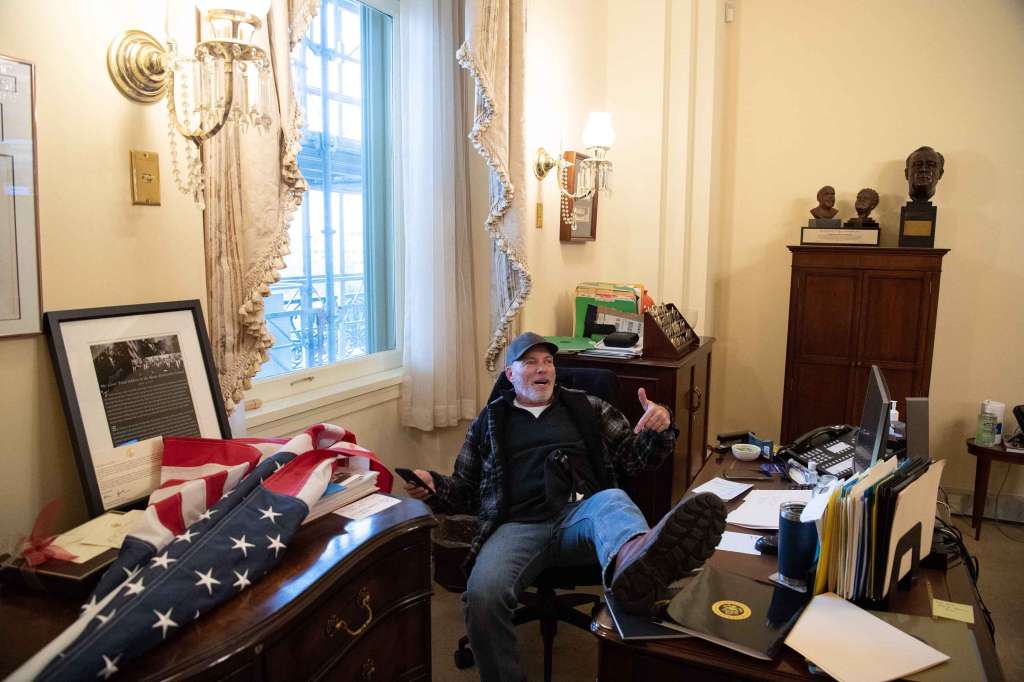 (CNN) — An Arkansas man who was infamously photographed putting his feet on a desk inside then-House Speaker Nancy Pelosi’s office during the January 6, 2021, insurrection was found guilty on eight counts by a Washington, DC, jury Monday.

Richard Barnett, 62, also known as “Bigo,” was charged with eight federal crimes relating to his actions at the US Capitol that day, including entering and remaining in a restricted area with a deadly or dangerous weapon and obstructing an official proceeding.

Barnett will be sentenced in early May and will stay released on home detention with a GPS ankle monitor until then, despite a request from prosecutors to revoke his release. He faces up to 20 years in prison for the top charge of obstructing an official proceeding.

The jury deliberated for a few hours before reaching the verdict. As the forewoman read the guilty verdict aloud, Barnett sat still and showed no reaction.

After the verdict, Barnett’s lawyer Joseph McBride told reporters outside the courthouse that his client had not received a fair trial, saying that Washington, DC, is “not a state” and made up primarily of “Biden voters.”

“We’re not saying there is something inherently wrong with DC or with the jurors.” McBride said. “We’re saying that we believe politics is the big elephant in the room that nobody wants to speak about here and political considerations about this trial have damaged the jury pool to the extent that we can’t get a fair trial.”

Barnett was caught on video surveillance entering Pelosi’s office area the afternoon of January 6, according to court documents. He was photographed with his boot propped on a desk and the flag draped nearby.

During the trial, Barnett testified he was pushed into the Capitol during the riot and was looking for a place to use the restroom inside the building, admiring all the artwork along the way. Barnett was combative with prosecutors during his testimony, and prosecutors later accused him of lying and being “belligerent.”

“I wasn’t part of that protest, I was pushed in,” Barnett said during his testimony, where he described himself as “hyper.”

According to court documents, Barnett had a stun gun tucked in his pants when he was inside Pelosi’s office. Barnett said during the trial that he believed it no longer worked because it was washed in the shower.

On January 6, Barnett was recorded saying he didn’t steal an envelope he had taken from inside the Capitol, adding that he wrote Pelosi a note calling her a “b***h,” according to court documents.

“I did not steal it,” Barnett said in the video. “I bled on it because they were macing me and I couldn’t f**king see so I figured I am in her office. I got blood on her office. I put a quarter on her desk even though she ain’t f**king worth it. And I left her a note on her desk that says ‘Nancy, Bigo was here, you b***h.'”

Barnett’s lawyers have also argued that Barnett wrote the word “biatch,” not “b***h,” which they said was “slang” and “less offensive.”