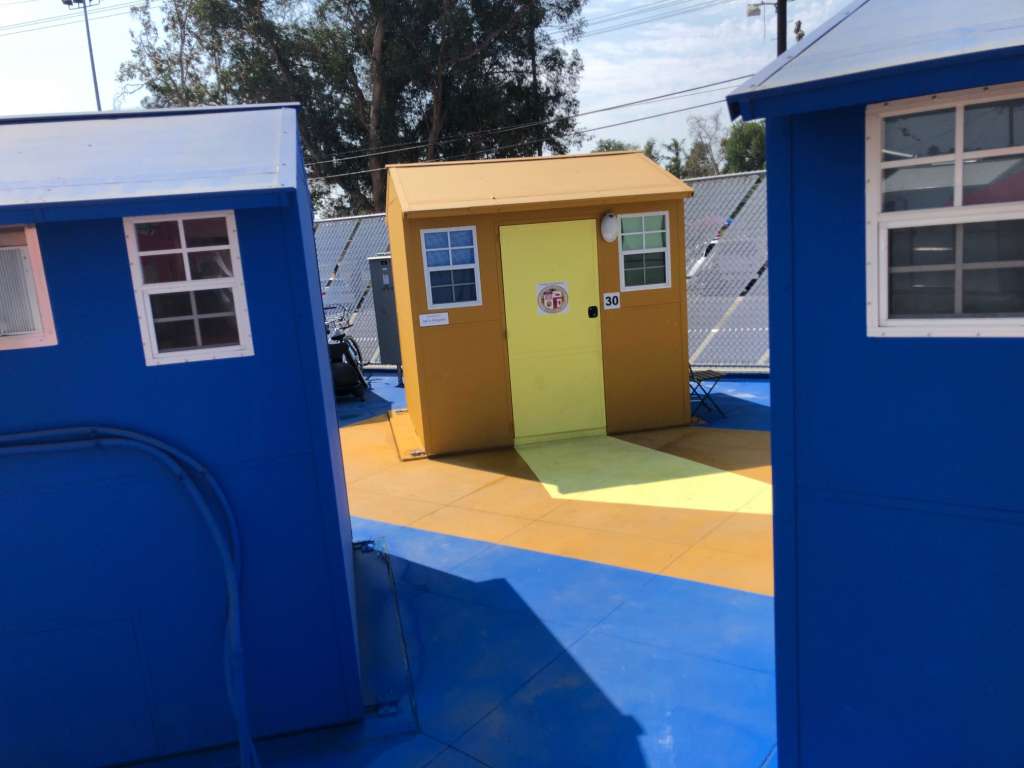 (CNN) — Jolinn Bracey slept in her Toyota Corolla for five years until she put homelessness in her rearview mirror by moving into a tiny home.

Bracey, 48, is one of 41 residents of The Chandler Boulevard Bridge Home Village in North Hollywood, California, which provides transitional housing for the homeless.

“This has given me a place to reconfigure myself and build up to my new home,” Bracey told CNN. “It put me back into practice of being consistent in the normal things that you do. It grounds you.”

Bracey moved into the 64-square-foot home in February. It features a bed, air conditioner, racks to hang her colorful clothes and, most importantly, a door that locks.

“It’s the first time in a long time that I don’t feel like someone is going to come up on me,” said Bracey.

She said a fire in a house she once owned and an unfair eviction at a place she rented led her into homelessness.

Villages like Chandler aim to chip away at that number by placing formerly homeless people in protected, fenced-off communities.

Helping residents get back on their feet

At Chandler, case managers can offer residents help for anything from drug and alcohol abuse and mental health issues, to navigating the complexities of job applications, health insurance and more.

“We’re dealing with people at the worst moment of their lives,” said Rowan Vansleve, president of Hope of the Valley, the non-profit that operates Chandler and other tiny home villages in the Los Angeles area.

The residents are also fed three meals a day.

“We do everything we can to make this site welcoming. We call it the ‘Love Club,'” Vansleve added.

Despite the nickname, the village does have rules. At the top of the list is no weapons or drugs allowed on campus, and paraphernalia must be checked at a locker outside.

Hope of the Valley says residents live in the homes for free and can stay as long as they are on a pathway to permanent housing, which counselors estimate takes three to six months.

Vansleve said the strategy is to take people off the streets within just a few miles of the tiny home village, not from other parts of Southern California, such as Skid Row.

“That way, people in the neighborhood see less homeless, less trash, less crime, fewer drug users roaming around,” he added. “I think these villages should spread across the country like Starbucks — be in every community.”

Vansleve says the tiny home villages are built on small parcels, many repurposed city properties. The Chandler complex sits on just half an acre.

An Everett, Washington, company called Pallet, which specializes in small shelter homes for homeless or temporary housing, built the homes for the Chandler village. The company estimates the minimum cost of each home to be $5,495.

Pallet reports it has helped build 44 tiny home villages, most on the West Coast, with 13 projects in the pipeline.

Hope of the Valley aims to house more than 900 people by November, Vansleve said.

‘One of the lucky ones’

Completely out of view from any passersby, Chandler resident Todd Dumanski loaded his laundry at the row of stacked washers and dryers.

Dumanski, 36, said he once amassed a net worth of well over a million dollars by founding a vitamin and supplement company in the Philadelphia area. But he said business misfortune and his drug use eventually put him on the streets after a move to Los Angeles.

Dumanski described a dark homeless underworld filled with debilitating or lethal drug abuse, rampant theft, all forms of violence including sexual assault against women and men, and bullets flying.

“I got shot at six times, by a revolver, by three gang members,” Dumanski said.

“They were young, maybe 18 to 24 years old. They shot at me because they wanted my spot for one of their friends who would soon become homeless.”

Dumanski said he had built an elaborate shelter near the 170 Freeway, hidden from view, and he had rigged up a grill.

Now, Dumanski lives in a tiny home less than a mile away, with little more than his bed, toiletries and a huge water jug with a handle that he lifts to add to his workouts.

“I like to throw everything in one backpack,” Dumanski said. “I don’t attach emotions to material stuff. Technically from the outside I have nothing, but I feel I have everything. “

Dumanski once had a house and a BMW — but also feelings of depression and suicide, he said.

“You give me tens of thousands of dollars, that isn’t going to help me right now,” Dumanski said. “I’m right where I want to be right now. I know what I have to do moving forward. This place has been a game-changer, man.”

Each tiny home is different. The interior style ranges from Dumanski’s minimalist white to Bracey’s kaleidoscopic flickers of purples, reds, aqua and more.

“My décor is just me — I’m colorful, funky,” Bracey declared. “I think outside the box.”

Inside her tiny home, Bracey dreamed out loud about getting a bachelor’s degree and spinning all the goodwill she found at Chandler onto people who are currently homeless.

She says she’s two classes away from finishing up an associate degree at Los Angeles Valley Community College.

“I just want to help everybody not go through what I went through,” Bracey said.

At the end of the month, Bracey said, she plans to move into an apartment. It will be just down the street, not far from the parking garage where she used to sleep in her car.