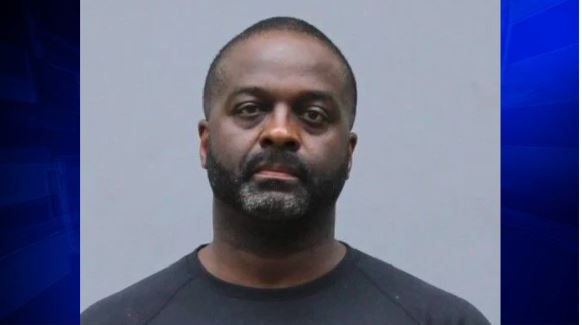 A Vernon man is being charged after police say they discovered he put cameras in his home bathroom and secretly recorded his girlfriend and her children. Mandatory Credit: Vernon Police/WFSB

VERNON, Connecticut (WFSB) — A Vernon man is being charged after police say they discovered he put cameras in his home bathroom and secretly recorded his girlfriend and her children.

Police said they arrested Donald Sterling, 47, after a warrant was executed at his home on Jan. 12.

They said they were familiar with Sterling from past domestic violence investigations where he was accused of being verbally and physically abusive, and controlling of a woman and her children.

Detectives said they started looking into the current case after receiving a report from the Department of Children and Families in Dec. 2021. DCF received a tip from a mandate reporter.

Investigators said a few years ago, two of the children, who were 13 and 18 years old at the time, discovered a bluetooth speaker in a bathroom that was actually a hidden camera.

Security cameras were actually set up all over the house, the woman told police. Those, however, they knew about.

The one in the bathroom, however, was the one that drew investigators’ attention. After the children found it, they secretly swapped out its SD card and delivered the card to a friend’s house for safekeeping, the warrant said.

Once the investigation was launched, the card was turned over to police.

The warrant says the video files on the SD card also showed:

“Sterling then entered the bathroom holding the cellular phone and adjusted the device so it faced the shower. Sterling put the toilet seat down so the view of the shower would not be obstructed.“

It went on to say that the video showed one of the victims, who was 18 at the time,…

“Removing her pajama pants to use the toilet, and her buttocks were clearly exposed on the video.”

The video file also showed an exposed juvenile, who Sterling is accused of assaulting.

In the meantime, the woman and her children had been trying to secretly move out of Sterling’s home, according to the warrant.

When she finally did it, Sterling knew where she moved and investigators suspected he somehow electronically tracked her.

When investigators finally sat down to interview the juvenile victim, she disclosed years of physical and emotional abuse by Sterling which included:

…locking her siblings in their rooms with a bucket to urinate, requiring all the children to move around the house only on their knees, and requiring [unnamed victim] to stand in a corner with his arms outstretched and supporting a board which was across his forearms.

…tried striking them with belts…

The victim told investigators that one night when Sterling was drunk, he attempted to “make out” with her.

When she started to cry, Sterling instructed her not to tell anyone and may have tried to bribe her silence with money, the document said.

In another instant, she said Sterling smacked her buttocks. Finally, she told investigators that while she was doing the dishes one night, he slipped his hands under her armpits and touched the sides her her breasts.

Sterling was charged with two counts of voyeurism, fourth-degree sexual assault and risk of injury to a minor.

He was held in lieu of a $250,000 court-set bond and was scheduled to face a judge on Thursday.

The case remains under investigation.