FORT LAUDERDALE, FLA. (WSVN) - Residents and businesses in Fort Lauderdale and other surrounding cities have begun to get their water back after dealing with service interruptions following a massive water main break.

City officials said water supply from the well fields was shut off so public works crews can repair the damaged line, but the water flow has since been temporarily restored.

However, residents might still experience long periods of interrupted water service as they work on a permanent solution.

Addressing the media on Thursday evening, Fort Lauderdale Mayor Dean Trantalis wasn’t sure whether or not the water would remain secured with the temporary fix, but by nighttime the good news came.

“Water is now flowing and, although at a lower pressure, it should be back to near normal sometime this evening,” said Trantalis. “We’ve managed to put a partial patch in the hole of the water main. Water pressure began increasing as a result. We are now building a concrete bunker around the broken pipe that will seal the break. It will protect the patch and prevent the break from increasing or becoming any worse.”

The concrete bunker has been built and appears to be working as planned.

Over the next few days, water will be redirected to a backup line while the damaged 42-inch pipe is replaced.

As of Thursday afternoon, approximately 220,000 residents were still affected by the break.

Employees of Fort Lauderdale Executive Airport claim they saw sewage water coming up on Wednesday and figured there was something wrong.

“Everything seems to be closed,” resident Lisa Neumayer said. “You don’t realize how many things are affected when you don’t have a water supply.”

Taciana Faria, who works next to the damaged water main, said the incident would have a big impact on the city.

“We had no idea what happened yesterday that it turned out to be such a big deal, but we didn’t know it was going to have this large of an impact on the whole city,” she said.

Trantalis said he has activated the city’s Emergency Operations Center.

“I have signed a proclamation declaring a local state of emergency to expedite obtaining any necessary supplies, equipment or materials to address this as quickly and efficiently as possible,” he said. “We have lost water supply to the city and cities that receive water through us.”

Should we need water for fire fighting, FLFR been in contacted with neighboring fire departments and has tanker trucks on standby. Refer to city social media for updates. @FTLCityNews @FLPD411 @WMPD411 #Media

Residents and businesses in Fort Lauderdale and surrounding communities were relying on reserve water and were originally told they should expect to be without water service from 7 a.m. Thursday through at least 7 a.m. Friday.

Faria and her co-workers used filtered water to wash their hands, Thursday morning. They had left work Wednesday unsure of what the problem was.

“This morning, we come to find out that they hit the wrong pipe, which is what we thought yesterday, because there was no way all the sewage water appeared out of nowhere,” Faria said. “Somebody must have done something wrong.” 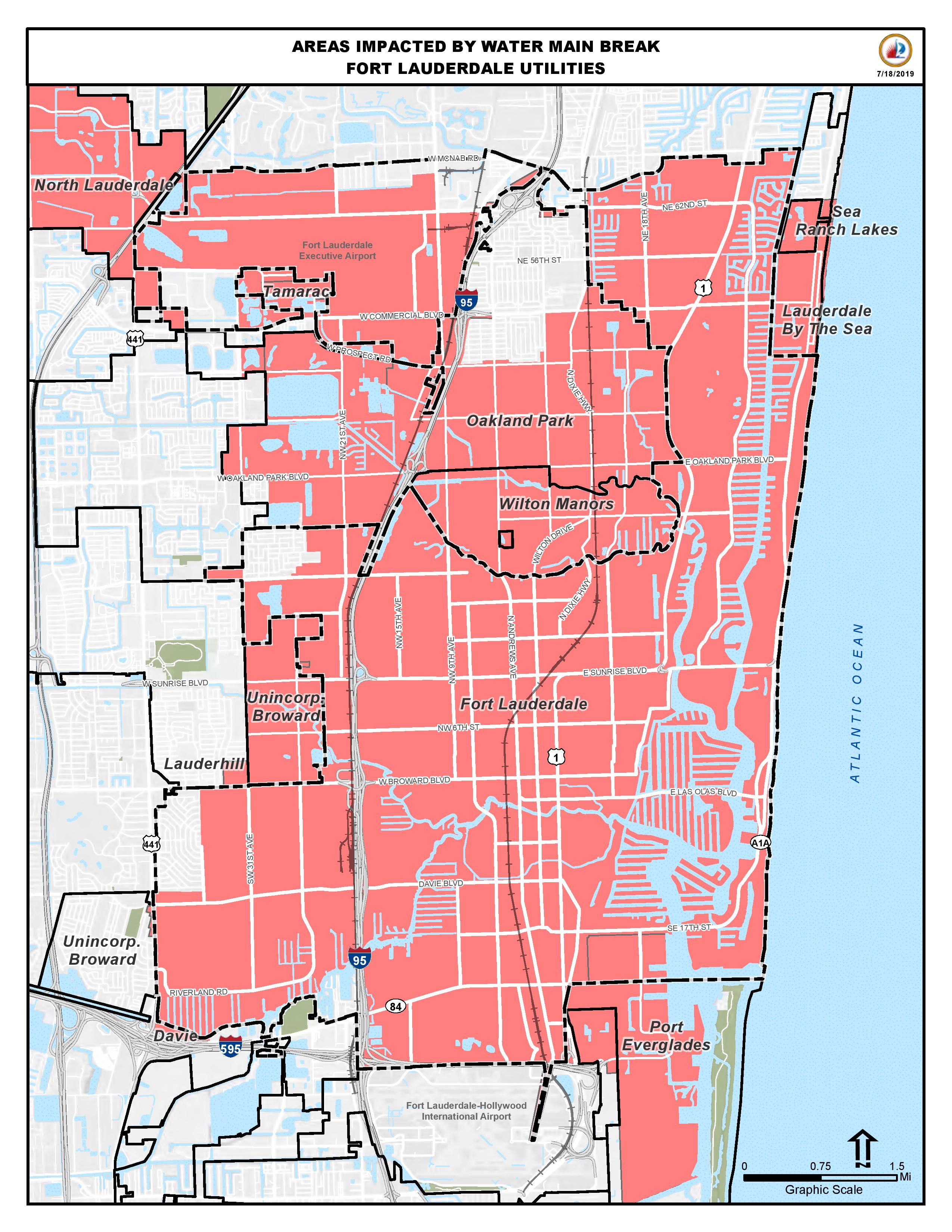 Officials have issued a boil water notice to those residents that still have water service in the affected areas.

If you still have water pressure and/or your water service has been temporarily restored, please continue to boil water until further notice.https://t.co/DjBsgjAUcr pic.twitter.com/ENFP6Ufn9L

A FPL spokesperson released a statement Thursday that read:

“We are aware of the situation in Fort Lauderdale where a third-party contractor struck a water main near the Fort Lauderdale Executive Airport while working on a Florida Power & Light Company construction project. We are investigating the incident and working with the city to respond. Please direct all inquiries regarding the water main incident to the city of Fort Lauderdale.”

“I cannot work. I cannot generate any money for the business,” he said. “Especially for a day like Thursday, we have tables on the patio. We usually get pretty packed. That’s a lot of revenue that we are actually losing today.”

Daniel McConnell, manager of Lester’s Diner, said they have been boiling their water and doing what they can to stay open throughout the day for their guests.

“We’re just maintaining, and we’re just doing it,” said McConnell. “We’re open, and we’re going to stay open as long as we can.”

“Rolling up the street, I did see several restaurants that were closed down including the one that I work at,” said Sierra Raspberry, who works at ETARU in Hallandale. “Until further notice we’re not going to be able to go back to work. Just that in itself is really going to affect my paycheck. Thursday is not too bad but if we’re closed Friday and Saturday it’s definitely going to affect a lot of us.”

Funky Buddha Brewery opened their doors on 4 p.m., Thursday to provide water to those affected.

Huge thanks to @funkybuddhabrew for stepping in to provide water to those who need it. They're open until midnight. Bring your own container. https://t.co/51qTHEcmwP

While several restaurants and bars closed early, some are pushing through and staying open for the night.

“We’ll be totally fine,” said Americal Social owner Paul Greenberg. “We have a ton of bottled water and we’re always prepared. We’re making it work, bottled water, canned soda, plastic everything. We want everybody to be successful and, of course, we feel for everybody. We’re fortunate enough right now to be able to open up.”

“We went to a couple of different places, they were all closed and so we came here, to American Social,” said Nanda Palissery, who is visiting from Pennsylvania.

“It is different to not see so many people and all the fancy cars down Las Olas,” said john Hakim, who is also visiting from Pennsylvania. “We’ll be fine. We just came down to relax, not work and have fun and we’ve done a pretty good job of that thus far today.”

Aerial cameras showed crews working near the break, which caused part of the road above it to collapse.

“Everyone here is ultimately suffering and they may not be able to recoup that,” said Neumayer.

The Galleria Mall will be closed until further notice because their air conditioning relies on running water. The Broward County Courthouse complex closed at noon, but announced they will resume normal operations on Friday morning.

“Things happen and I’m sure that whoever is responsible is being held accountable and they’re probably mortified,” said resident Michelle Holly.

Hotels like the Riverside Hotel evacuated their guests and moved them to other locations outside of city limits.

“We kind of monitored it, what was going on,” Heiko Dobrikow said. “Our hotel, around 10 o’clock, we made the decision that we are going to start evacuation proceedings.”

“Hopefully they get it up and running soon for the people of Fort Lauderdale so they have their water back,” said one hotel guest.

City leaders are urging residents to be ready to be without water at a moment’s notice.

Those with water are advised to only use it if “absolutely necessary,” officials said.

One resident affected said he had to dip into his hurricane supplies to make do for the time being.

“I always buy extra food and water right before hurricane season,” said Fort Lauderdale resident Evio Landa. “You’re prepared and you don’t have to beat the crowds because every year we’re going to have hurricanes. Every year it’s the same thing so you might as well prepare for it.”

A 24-hour neighbor hotline has been established to help those affected by the water main break. The hotline can be reached at 954-828-8000.

“We have conducted a rapid assessment of critical facilities such as nursing homes and hospitals,” said Trantalis. “They are reporting no issues at this time but we are on standby to take action as necessary.”

“You’re still going to have the boil alert until we clear all the testing and that kind of thing,” said Public Works Director Paul Berg. “Worst case right now is at least 24 hours to perhaps 36.”