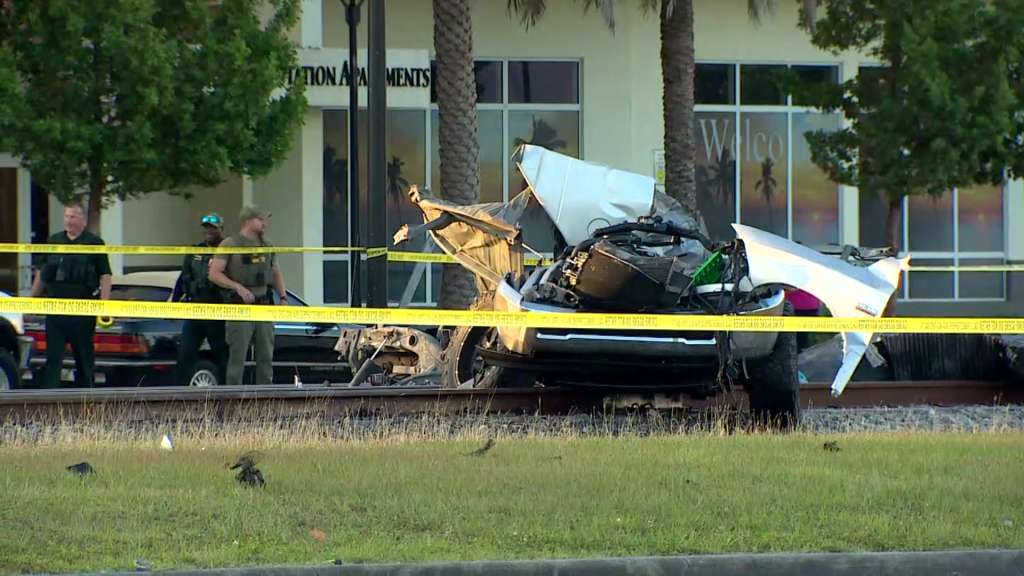 POMPANO BEACH, FLA. (WSVN) - A driver has died after colliding with a Brightline train in Pompano Beach.

The crash happened in the northbound lanes of North Dixie Highway, near Sixth Street, just after 5:30 a.m., Monday.

The mangled vehicle could be seen split in half along the tracks.

“I heard the crash, and then the helicopter was up there,” said neighbor Bob Luizzo.

Fire rescue crews responded to the scene and rushed the driver, identified as 27-year-old Jacob Bresnahan, to the hospital where he succumbed to his injuries.

Friends of Bresnahan called him the most kindhearted and nicest person you could imagine. He was also a devoted young dad who was going to get married later in the year.

Surveillance video shows the moments before the crash and the aftermath. It shows a pickup truck heading north on North Flager Avenue, parallel the tracks before colliding with the train.

Brightline officials said the gates were down, signaling an incoming train, and the driver drove around the gate.

Brightline has been asking people to wait and never drive around the gates after several similar crashes in the last few months.

“What needs to happen is education and proper behavior around railroad tracks,” said Brightline Senior VP Ben Porritt. “The railroad is safe. It is behavior that we need to educate and change around these railroad tracks.”

Neighbors said they have seen at least six crashes involving the Brightline train in the same area, in this year alone.

“Right here in this area, within the last year or so, we’ve had at least three accidents, you know, train accidents,” said Montez Lynette, who lives nearby. “People trying to beat the trains. You just, you just can’t do it. Simply just cannot do it.”

“Me, I always see that there’s no train in sight before I go over the tracks because of that Brightline,” Luizzo said.

North Dixie Highway between Northwest Third Street and Sixth Street was closed to traffic but has since reopened.

Nearly 60 fatalities have been reportedly caused by Brightline since mid 2017, most because of drivers going into the path of the trains or walking on the tracks.

Several weeks ago in Hallandale Beach, a woman survived a crash attempting to go around the Brightline gates.

Another crash in Hallandale Beach left a driver in critical condition.

In Deerfield Beach a mother and baby nearly escaped a collision involving a Brightline train when their vehicle got stuck on the tracks.

Brightline and the Florida Department of Transportation are reportedly asking the federal government for $45 million for crossing enhancements that would discourage drivers from attempting to go around the tracks to beat the trains.

The Brightline tracks have since reopened, a bouquet of flowers now lies on the tracks as a reminder.

Brightline and the Department of Transportation feel the measures could help reduce the amount of collisions and people who die on the tracks.