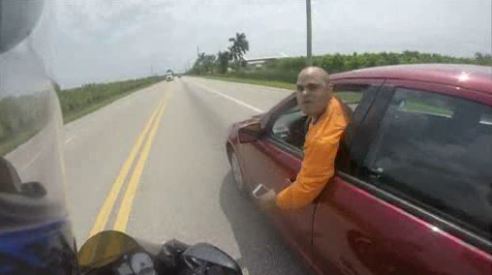 HOMESTEAD, Fla. (WSVN) — A motorcyclist, angered after a driver cut him off, took matters into his own hands, ensuing in road rage that could have ended in tragedy.

That 23-year-old motorcyclist caught the whole interaction on camera and admitted that his actions were not the best way to react. He told 7News that he wants to bring awareness of the damage road rage can do in South Florida.

Mechanic Rone Gonzalez was driving his motorcycle to work Monday morning, when a motorist driving a red Ford Fusion cut him off near Southwest 137th Avenue and Campbell Drive in Homestead.

Gonzalez rode between two lanes to the front of the pack of drivers when he and the driver played a dangerous game of cat and mouse, going over 90 miles per hour.

At the following red light, several words and hand gestures were exchanged, before Gonzalez smacked the driver’s mirror and zoomed off. "At that point, I just wanted to get out of the situation," he said. "You know what? Forget about this."

He tried to get away from the driver but ended up driving in the opposite lane and for almost a minute, Gonzalez sped against oncoming traffic. At least five cars came at him as he swerved in between them.

The driver tried to get into the opposite lane, and with his body partially out of the car, he spat at Gonzalez. He then appeared to try to hit the motorcycle before Gonzalez managed to get away. "I’m just like, ‘Man, I’m on a motorcycle. My life is literally on your hands,’" Gonzalez said.

When Gonzalez was asked why he hit the driver’s mirror, he said it was not the right way to react. "I don’t know, to be honest. It was a stupid move," he said.

He told 7News that he wears a camera to document all of his rides.

Police are now investigating the incident. "It’s alarming," said Homestead Police Detective Fernando Morales. "It’s something that our traffic unit is going to take a look at. They’re going to look at it, actually, piece by piece… see what occurred."

Homestead Police said the driver of the Ford Fusion, 30-year-old Dion Rosa, actually called police while he was still on the road and filed a complaint on Gonzalez. The police report said in part that Rosa got into a "verbal argument with unknown male who smacked his rear view mirror causing minor damage."

The report also said the "reporting person stated he did not wish to pursue charges."

Rosa said in a text message to 7News that he is not proud of his actions and, "It only takes a second for an accident to happen yet we both took no consideration over our loved ones or the people around us at the time. Lesson learned."

Morales could not say if laws were broken. "I cannot say that at this point because there is an ongoing investigation, and I’m going to let the traffic investigators do their job," he said.

Gonzalez said he tried to file a police report with Homestead Police but was told that road rage is a common problem and that he shouldn’t bother.