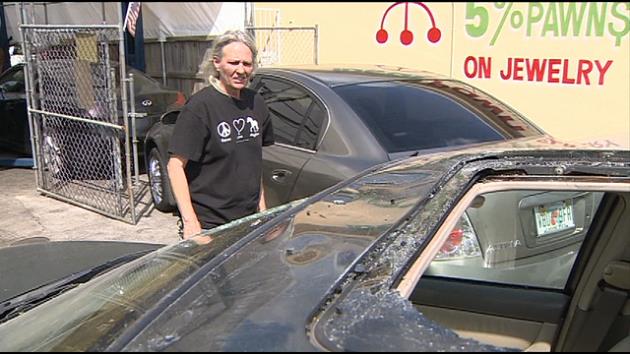 Terry Page: “This is Sweet Lullaby.”

…it’s obvious her focus is horses.

Terry Page: “I love kissing them, grabbing their heads and kissing on them.”

Terry moved from North Florida to South Florida just to work with the animals. That was 30 years ago.

Earlier this year, Terry had gone with a horse from Calder to run at Gulfstream. She was in the barn.

Terry Page: “And all of a sudden, everybody started screaming, ‘Loose horse, loose horse!’ And I can hear it, the bang, bang, bang, and everyone is yelling, ‘Oh my God, the horse is in the car!'”

Terry ran outside. It was her car.

Terry Page: “And I said, ‘Oh my God,’ and they all told me that the horse was inside of my car. His front legs went in and through the sunroof.”

Her first concern, of course, the horse, named Malibu Blues, which had just won a race at Gulfstream.

Terry Page: “I was worried about the horse. I mean, he had to be hurt. Broken legs, I didn’t know. Finally, somebody caught him and they said the horse was OK. They got him and the doctors were with him.”

Then she returned to her car and saw how badly it was damaged.

Terry spoke to a few horse owners who told her, if their horse damaged a car like this, they would pay for it, so Terry called the owner of Malibu Blue.

Terry Page: “Made sure the horse was OK, but she did tell me that they’re not going to help me out. She said she’s broke, she said that my car ruined her horse for life.”

Terry only has PIP insurance on her car, no collision, and does not have the $4,000 to fix it, and no idea who should pay for it.

Terry Page: “It’s not even the horse’s fault. I mean, animals don’t realize, when they get scared, they run. I can’t blame anybody. All I want is my car taken care of.”

Well, Howard, I have never asked you this before. A horse literally runs over a car. Who’s responsible for the damage?

Howard Finkelstein: “Whoever is responsible for horse. It could be the owner, or in this case, the trainer. The trainer is responsible because, when they take custody of the horse, they have the duty to control the animal. If it gets away and damages someone or something, the trainer or their insurance company has to pay for it.”

We first talked to the owner of Malibu Blues, who told us she absolutely would not pay for the damage to Terry’s car, that we had no legal right to call her.

Fortunately, the trainer was helpful. She was not with the horse that day, but since the animal was under her care, her insurance company was going to pay to repair Terry’s car.

Howard Finkelstein: “With a horse, the owner or the trainer is usually responsible for the damage. With a dog, it’s much simpler. If they damage someone or their property, the owner has to pay for it.”

Terry Page: “And they paid for totally everything.”

Not only did the trainer’s insurance company pay to fix Terry’s car, they supplied a rental car to her while she waited. Obviously, Terry is a happy lady.

Terry Page: “Awesome. Everything worked out perfect, and Help Me Howard is great and I have my car.”

We were told, while Malibu Blues is OK, they aren’t certain if the horse will ever be able to race again because of the damage to its legs. Why was Malibu Blues loose after winning the race? Someone startled the horse, he got away from his handler and took off.

Racing to solve a problem that you’re saddled with? Don’t horse around. Stable it with us. We aren’t trained thoroughbreds, but grooming a solution can produce a winner.