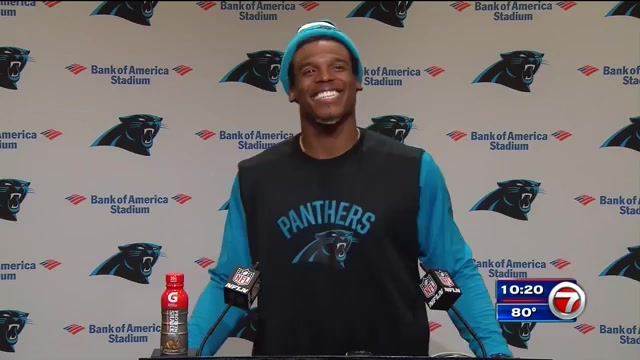 The NFL and NFL Players Association announced Monday they plan to conduct a joint review to determine if the Panthers followed the correct concussion protocol after Newton took a hard shot from Saints defensive tackle David Onyemata midway through the fourth quarter. If the concussion protocol was not properly followed the team is subject to discipline, including a $150,000 fine.

Newton spent time on the ground after the hit. Then, as he was walking toward the sideline, appeared to stumble to one knee. He briefly pointed toward his right eye.

He sat out one play, but returned on the next offensive series and finished the game.

“He took a hit. But when he walked off and he told the trainers he got poked in the eye, then they did take him into the tent and checked him for a concussion, which he did not have,” Hurney said. “And it was really getting poked in the eye.”

Hurney said Newton intentionally took a knee because he was told to by the team’s training staff so Carolina could get an official timeout, thus allowing backup quarterback Derek Anderson a chance to warm up. Anderson came in for one third down play and was nearly intercepted.

However, the question could become whether or not Newton should have been taken to the locker room for evaluations.

The league and the players union changed its concussion protocol last month after Houston Texans quarterback Tom Savage returned to the field after having a concussion that left the quarterback’s hands shaking after a hit.

The changes to the protocol include the requirement of a locker room concussion evaluation for all players “demonstrating gross or sustained vertical instability (e.g., stumbling or falling to the ground when trying to stand.)”

Newton did not visit the locker room.

Panthers coach Ron Rivera said he is very confident that the protocol was followed correctly.

“Based on what the young man (Newton) said to me, that is what I believe happened,” Rivera said. “And again, from that point on I don’t think anything else needs to be said about it.”

Newton said after the game Sunday that “precautionary concussion protocol things” happened, but “it wasn’t my head. It was my eye. My helmet had come down low enough over my eyelid and it got pressed by the player’s stomach.”

The Panthers were investigated once before in the 2016 season opener at Denver when Newton took a blow to the head but remained in the game.

It was later determined the Panthers handled that situation correctly and no fines were handed out.

The Seattle Seahawks were fined $100,000 in Week 10 after the league and union determined they failed to apply the concussion protocol properly after quarterback Russell Wilson took a blow to the head against the Arizona Cardinals.