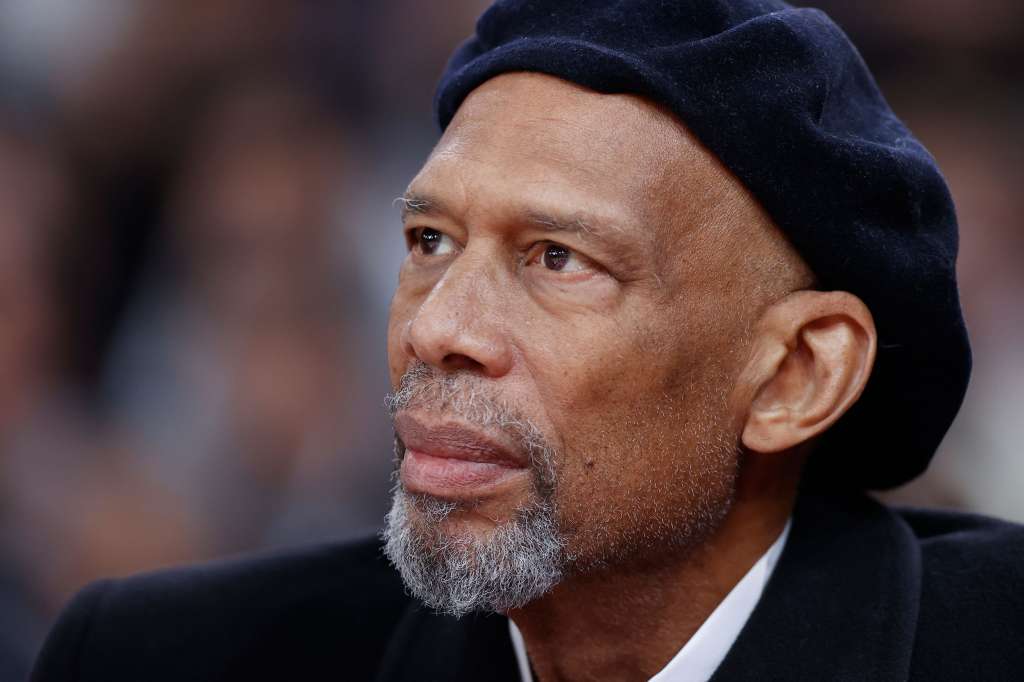 PARIS, FRANCE - JANUARY 24: A close up shot of NBA Legend, Kareem Abdul-Jabbar during the Milwaukee Bucks game against the Charlotte Hornets as part of NBA Paris Games 2020 on January 24, 2020 in Paris, France at the AccorHotels Arena. NOTE TO USER: User expressly acknowledges and agrees that, by downloading and/or using this Photograph, user is consenting to the terms and conditions of the Getty Images License Agreement. Mandatory Copyright Notice: Copyright 2020 NBAE (Photo by Catherine Steenkeste/NBAE via Getty Images)

(CNN) — If NBA players are not vaccinated, they shouldn’t be on the team, basketball Hall of Famer Kareem Abdul-Jabbar told Rolling Stone.

“The NBA should insist that all players and staff are vaccinated or remove them from the team,” said Abdul-Jabbar.

“There is no room for players who are willing to risk the health and lives of their teammates, the staff and the fans simply because they are unable to grasp the seriousness of the situation or do the necessary research.”

Abdul-Jabbar elaborated on that point during an interview on Don Lemon Tonight Monday, saying, “I don’t think that they are behaving like good teammates or good citizens. This is a war that we’re involved in. And masks and vaccines — they are the weapons that we use to fight this war.”

Abdul-Jabbar has been a vocal advocate for getting the Covid-19 vaccine. The NBA great received his vaccine on camera and appeared in an NBA public service announcement encouraging others to get vaccinated.

The NBA does not require players to be vaccinated against Covid-19 to play. However, referees and other staff who work closely with players are required to be fully vaccinated.

New York City and San Francisco changed the game in August when they required that NBA players on their home teams be vaccinated. That could mean that stars of NBA teams in those cities would not be able to play, unless they are medically or religiously exempted.

Brooklyn Nets point guard Kyrie Irving wasn’t physically present with his teammates at the Nets annual media day on Monday. But Irving took a question on the issue remotely.

Irving did not disclose his vaccination status — nor did he say if he expected to be vaccinated or compliant by the time the Nets return home following their preseason game against the Los Angeles Lakers on Sunday. He said he wants “to keep that stuff private.”

“I’m a human being first,” Irving said. “Obviously living in this public sphere, it’s just a lot of questions about what’s going on in the world of Kyrie and I think I just would love to just keep that private and handle it the right way, with my team and go forward together with the plan.”

“What I find especially disingenuous about the vaccine deniers is their arrogance at disbelieving immunology and other medical experts,” he told Rolling Stone. “Yet, if their child was sick or they themselves needed emergency medical treatment, how quickly would they do exactly what those same experts told them to do?”

During his interview with Lemon, Abdul-Jabbar touched on vaccine misinformation, saying, “The more ignorance that is spread around, the easier it is to confuse people about what’s happening.”

“We have to educate ourselves so that we understand what is being offered. These vaccines are safe and they are effective. And we have to fight this virus as a group. We can’t have certain people feeling, ‘Well, I don’t have to do that.’ That’s insanity,” Abdul-Jabbar said.

While vaccine hesitancy is shrinking, there are parts of the population who are still more hesitant than others.

Black Americans are the least vaccinated demographic group, according to the US Centers for Disease Control and Prevention, which estimated in August that 25% of the Black population in the US was fully vaccinated. Of the US population that is fully vaccinated, only 9% are Black. However, this data is incomplete — the CDC reports that race and ethnicity data is available for only 68% of people who are fully vaccinated.

Abdul-Jabbar has spoken about the importance of reaching out to those who are vaccine hesitant, especially those in the minority community.

“We have to gain the trust of minority communities by showing them that the vaccine is effective and that it’s in their best interest to take the vaccine,” Abdul-Jabbar told CNN’s Chris Cuomo in March. “The problem in times past was that no one wanted to give them the latest treatment.”

He referred to the Tuskegee experiment, when researchers unethically withheld treatment for Black men who had syphilis between 1932 and 1972, letting the disease progress.

Abdul-Jabbar said athletes and celebrities may be able to help those who are vaccine hesitant.

“A lot of people in minority communities respect athletes that go out there and take their word on things of this nature,” he told CNN in March. “Anytime that that happens it’s making it possible for more people to get the vaccination that they need and help us beat this Covid-19 thing down.”