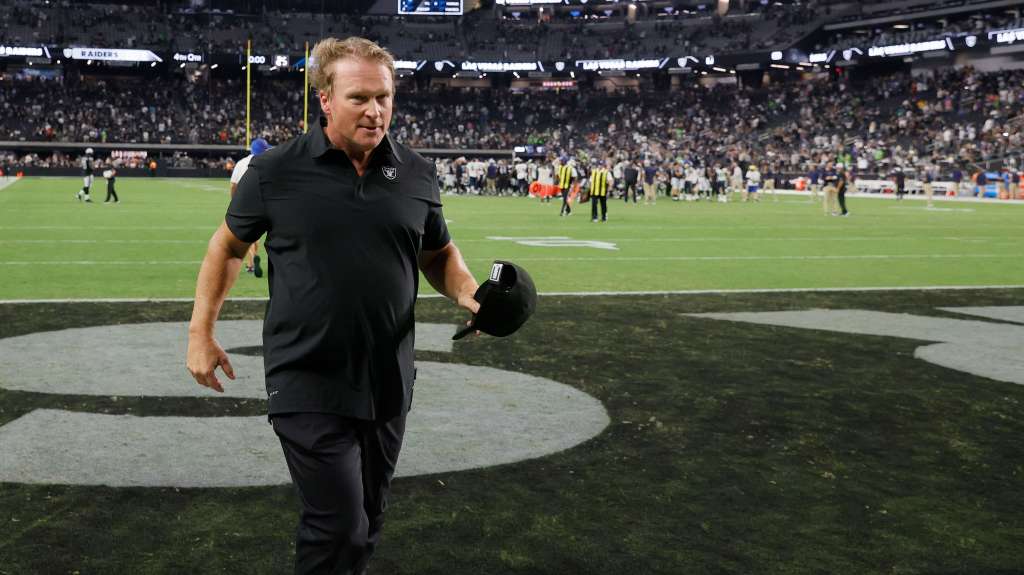 LAS VEGAS, NEVADA - AUGUST 14: Head coach Jon Gruden of the Las Vegas Raiders takes his hat off to give to a fan as he runs of the field following the team's 20-7 victory over the Seattle Seahawks during a preseason game at Allegiant Stadium on August 14, 2021 in Las Vegas, Nevada. (Photo by Ethan Miller/Getty Images)

(CNN) — Former Raiders coach Jon Gruden alleges in a lawsuit that the NFL and Commissioner Roger Goodell sought to destroy his career and reputation through a malicious and orchestrated campaign.

Gruden resigned in October as head coach of the Raiders after reports emerged of him using homophobic, racist and misogynistic language in emails while he worked as an ESPN analyst.

The questionable emails were uncovered as part of a league investigation into workplace misconduct at the Washington Football Team.

“The complaint alleges that the defendants selectively leaked Gruden’s private correspondence to the Wall Street Journal and New York Times in order to harm Gruden’s reputation and force him out of his job,” Gruden’s attorney Adam Hosmer-Henner said in a statement. “There is no explanation or justification for why Gruden’s emails were the only ones made public out of the 650,000 emails collected in the NFL’s investigation of the Washington Football Team or for why the emails were held for months before being released in the middle of the Raiders’ season.”

NFL spokesman Brian McCarthy told CNN in a statement, “The allegations are entirely meritless and the NFL will vigorously defend against these claims.”

The suit claims the NFL’s actions have led to Gruden suffering from “severe financial damages and harm to his career and reputation.”

Though the source of the leaked emails is unknown, the lawsuit claims they were leaked by the NFL and alleges the league deliberately sought to hurt Gruden while other details of the investigation into the Washington football team were kept secret.

“In contrast to the formalities of the Washington Football Team investigation, Defendants’ treatment of Gruden was a Soviet-style character assassination,” the lawsuit says. “There was no warning and no process. Defendants held the emails for months until they were leaked to the national media in the middle of the Raiders’ season in order to cause maximum damage to Gruden.”

McCarthy told CNN in October the league had no plans to release more details from the investigation for confidentiality reasons.

“Out of 650,000 emails obtained months earlier in connection with the investigation into workplace misconduct by the Washington Football Team, Defendants weaponized a small subset that were authored by Gruden prior to his hiring by the Raiders. Defendants then purposefully leveraged these emails to cause the termination of Gruden’s coaching contract, endorsements, and sponsorships,” the lawsuit says.

It claims Gruden should be awarded compensatory damages and “exemplary and punitive damages as a result of Defendants’ oppression, fraud, or malice,” but does not specify an amount.

In July, the NFL announced it fined the Washington organization $10 million after an independent investigation found the club’s work environment was “highly unprofessional,” especially for women.

The fine came after 15 former female employees and two journalists who covered the team accused team staffers of sexual harassment and verbal abuse. The club launched an investigation last July, which the NFL took over in August.

The lawsuit says that after the emails were revealed, “Defendants pressured the Raiders to fire Gruden.”

The Raiders did not and Gruden coached another game.

The suit claims the NFL and Goodell “ratcheted up the pressure by intimating” more documents would be made public.

Then the New York Times reported it reviewed more emails and found Gruden denounced women being employed as on-field officials, a team drafting an openly gay player, and the tolerance for national anthem protesters.

The lawsuit alleges the league and commissioner leaked the emails the Times reported on.

Many of Gruden’s emails, covering a seven-year period, were sent to Bruce Allen, the Washington team’s then-president who was fired in December 2019, according to the Times.

A league source, just before Gruden resigned, confirmed the accuracy of the Times’ story to CNN.

Gruden was one of the NFL’s highest-paid coaches, having signed a 10-year, $100 million contract with the Raiders, according to salary tracking website Spotrac.

He first coached the Raiders from 1998 to 2001, then won a Super Bowl with the Tampa Bay Buccaneers in 2002. At the time, Gruden was 39 and then, the youngest coach to win the Super Bowl.

He left the Bucs in 2008 and became a football analyst for ESPN and his messages were sent while he was working for ESPN as a color analyst during “Monday Night Football,” the Times reported.