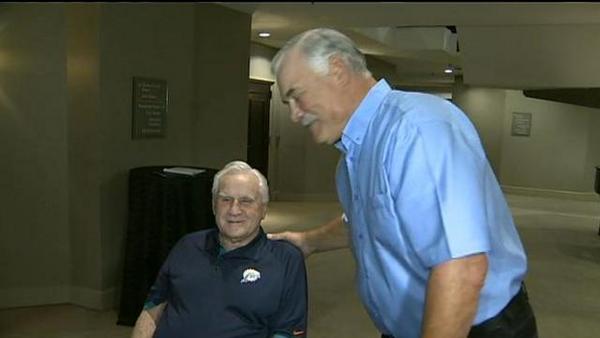 WASHINGTON, D.C. (WSVN) — The undefeated 1972 Miami Dolphins will be honored in the nation’s capital.

Tuesday at 2 p.m., the ’72 Dolphins team will be special guests to President Barack Obama at a reception in the East Wing of the White House. “The President of the United States, you know, the most powerful man in the world and here’s a humble kid from Massachusetts, son of an Italian baker who’s going to the White House, you have to be kidding!” exclaimed former Dolphins linebacker Nick Buoniconti. “I was thrilled!”

The ’72 Dolphins are famous for being the only undefeated team in the NFL, as well as being the only Super Bowl champions to have never been invited to the White House since hosting the champs became an annual event.

Forty one years later, the ’72 Dolphins are finally being invited to the White House. “I’m glad I wasn’t sitting at the edge of my chair waiting for this to happen,” said former Dolphins quarterback Bob Griese.

Former Dolphins tight end Marv Flemming said he started planning the visit 15 years ago and enlisted his teammates to help. “I get the call from Dick Anderson and Dick says, ‘Marvin, guess what? The White House called,’ and I said, ‘You’re kidding me!’ and I did my dance,” he said.

The ’72 Dolphins are the only team in NFL history to perform the feat of a perfect season. “If you have to say one thing that made the difference, in my opinion, was Shula,” said former Dolphins running back Larry Csonka. “He was driven, he was fast and he made us a little crazy at the time but it all worked out.”

The team will give President Obama a leather-bound book with action shots of every player on the ’72 perfect season team. Each of the players’ pictures is signed by the individual player. “This is a great opportunity and it’s a great thing and I herald the President for being able to bring us here after all this time,” said former Dolphins running back Mercury Morris. “He was kid when this was going on.”

President Obama was 11 years old when the Miami Dolphins achieved their perfect season in 1972.