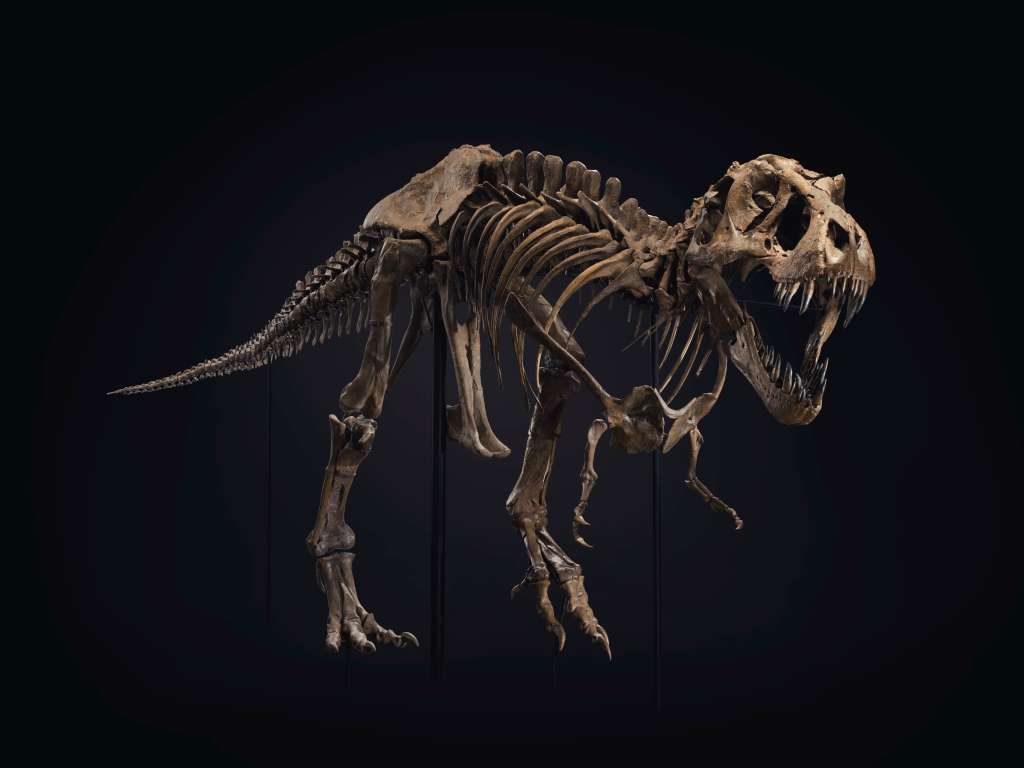 (CNN) — The sale of one of the world’s most complete Tyrannosaurus rex skeletons smashed auction estimates, when it sold for $31.8 million at a Christie’s auction on Tuesday night. The sale set a new world record for any dinosaur skeleton or fossil ever sold at auction.

STAN the T. rex, named after the paleontologist who first discovered his bones, walked the Earth some 67 million years ago. His skeleton was displayed at the auction house’s flagship location in New York with an initial estimate of $6 million-$8 million.

The skeleton was part of Christie’s 20th Century Evening Sale, which auctioned 59 works spanning 20th and 21st centuries, including a painting by American artist Cy Twombly that went for nearly $38.7 million.

For the past two decades, STAN has been studied at the Black Hills Institute in South Dakota, and paleontologists have produced dozens of papers and studies as a result.

Standing 13 feet high and 40 feet long, including its tail, STAN is made up of 188 bones, making it one of the largest and most complete T. rex skeletons in the world.

The first of its bones was found in the Hell Creek Formation that spans parts of Montana, North and South Dakota and Wyoming in 1987 by Stan Sacrison, an amateur paleontologist.

Initially misidentified as Triceratops bones, they lay undisturbed until 1992, when visiting paleontologists realized their true origin.

It then took more than 30,000 hours of manual labor to excavate and restore the skeleton. Researchers have since found that STAN survived a broken neck during his lifetime, after which two of his vertebrae fused together.

There are also signs of puncture wounds in his skull and one rib that may have been caused by another T. rex.

STAN would have weighed 7-8 tons — about twice as much as today’s African elephant — and his longest teeth measure more than 11 inches, with serrated edges.

“We are honored to be bringing STAN to auction and to have been entrusted with the stewardship of such an iconic and important T. rex,” said James Hyslop, head of scientific instruments, globes and natural history at Christie’s, prior to the sale. He added that STAN would be visible 24 hours a day through the windows at Christie’s Rockefeller Center.

“This special viewing opportunity will offer enthusiasts and pedestrians alike the chance to see and learn about one of the world’s most iconic dinosaurs in a socially distanced setting.”

In August, a new species of dinosaur related to the Tyrannosaurus rex was discovered in England.

The dinosaur would have measured about 13 feet long, and is a type of theropod — a group of carnivores that typically walked on two legs instead of four, which includes the T. rex.

It lived in the Cretaceous period, about 115 million years ago, according to paleontologists at the University of Southampton, who spent months studying four bones that were found last year on the Isle of Wight, off the south coast of England.