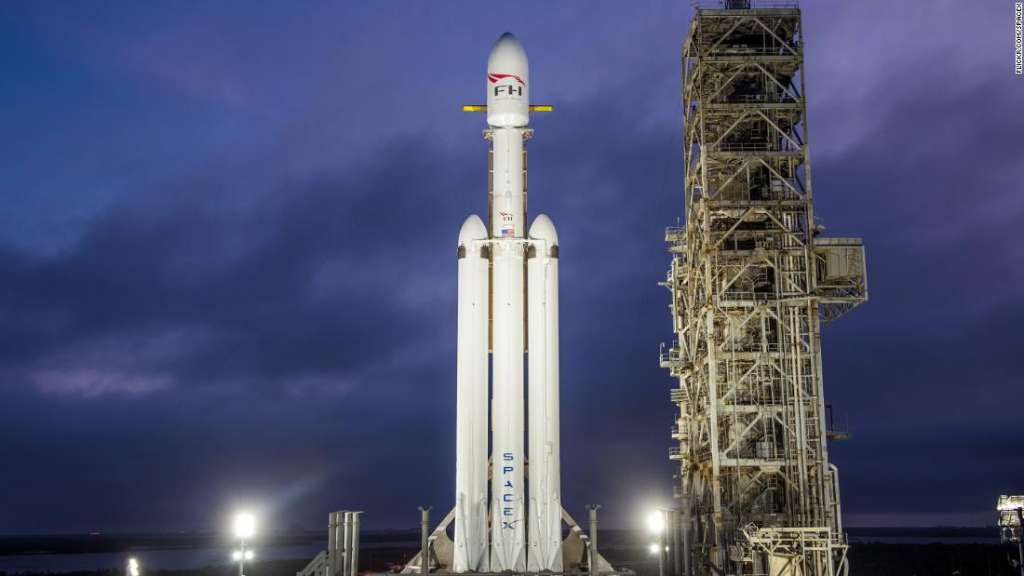 FALCON HEAVY LAUNCH – Watch live from Cape Canaveral, where SpaceX is launching their first-ever Falcon Heavy megarocket at 3:45 pm… with a Tesla convertible inside! The company will attempt to land ALL THREE of the separate rocket boosters shortly after launch.STORY: http://bit.ly/2GTKd0p

(CNN Money) — If you have space-obsessed friends, you might have heard the words “Falcon Heavy” used a lot lately.

Falcon Heavy is the name of a highly anticipated SpaceX rocket that’s set to launch for the first time on Tuesday.

Liftoff can happen anytime between 1:30 pm and 4 pm ET.

You can attribute the buzz to the Falcon Heavy’s size: It will be the most powerful rocket in the world. It’s built by the industry disrupting rocket company started by billionaire Elon Musk.

If you’re just catching up to the action, we’ve answered all the questions you need to know before next month’s launch.

Why does it matter?

This rocket will have thrust equal to 18 Boeing 747 jetliners.

SpaceX has said the rocket will be capable of sending humans to Mars, even though SpaceX is planning to build an entirely different system for Mars travel, called the BFR.

The more thrust a rocket has, the farther it can travel and the bigger the satellite, spacecraft or other payload it can send into orbit.

That opens up a whole range of business opportunities for SpaceX, which has been leading a new era of spaceflight in which companies — not just governments — drive the industry forward.

What is it sending to space?

For this test mission, the Falcon Heavy will launch a dummy payload. Specifically, it’ll send a cherry red Tesla roadster from Musk’s personal collection into deep space. There’s no scientific reason to send the car to space. But it does serve as self-promotion for Musk, who is also the CEO of Tesla.

When asked on Twitter why he wanted to throw away a $100,000 car, he replied, “I love the thought of a car drifting apparently endlessly through space and perhaps being discovered by an alien race millions of years in the future.”

Once the Falcon Heavy has proven it can fly, the rocket can start doing its real job of hauling satellites and other payloads into orbit.

The rocket is already signed up to carry three hefty telecommunications satellites into orbit.

The U.S. Air Force also plans to use a Falcon Heavy to launch a payload dubbed STP-2 that includes some weather forecasting satellites.

SpaceX also said in early 2017 that two space tourists put down a deposit to ride on a Falcon Heavy for a trip around the moon. At the time, SpaceX said that trip could occur in 2018, though the company hasn’t offered any updates.

How much does it cost?

The Falcon Heavy has a $90 million sticker price. That’s 45% more expensive than the Falcon 9 rocket SpaceX has used for every mission going back to 2012.

But the Falcon Heavy is essentially three Falcon 9s strapped together, and it’ll boast about three times the thrust of the Falcon 9.

And, compared to rockets that better rival the Falcon Heavy’s power, it’s a bargain.

The Delta IV Heavy, which is built by legacy aerospace firm United Launch Alliance and is currently the world’s most powerful rocket, can reportedly cost as much as $400 million per launch.

It should also be noted that the Falcon Heavy will out-power the Delta IV Heavy by a factor of two.

Why is it so cheap?

SpaceX says it’s been able to undercut the competition on price because of its reusable rocket parts.

The company is the only rocket builder in the world that safely returns first-stage rocket boosters back to Earth.

The first Falcon Heavy flight will even use two refurbished boosters from previous Falcon 9 missions.

And, in what promises to be a stunning spectacle, SpaceX says it will attempt to guide all three of the Falcon Heavy’s first-stage boosters back to Earth after launch. Two of them will make a synchronized landing back at Kennedy Space Center. The third booster will land on a droneship, which is a remote controlled platform that catches rockets out at sea.

SpaceX is taking its sweet time preparing for launch. The company said back in 2011 that the rocket would be ready in 2013. That target eventually moved to November 2017, then December. Now, SpaceX is finally readyto launch.

But even with all that careful preparation, things could still go haywire.

“Falcon Heavy requires the simultaneous ignition of 27 orbital-class engines. There’s a lot that could go wrong there,” Musk said at a conference last year. “This is one of those things that’s very difficult to test on the ground … real good chance that vehicle does not make it to orbit.”

What happens if it explodes?

An explosion, apart from an eruption of flames and smoke, would destroy Musk’s Tesla — and, potentially, the launch pad.

A SpaceX rocket explosion has destroyed a launch pad before. In September 2016, a Falcon 9 rocket spontaneously erupted in flames and caused significant damage to a launch site at Cape Canaveral Air Force Station. It took more than a year to refurbish the pad.

The Falcon Heavy is ready to fly from Kennedy Space Center’s historic Launch Complex 39A. It’s the same pad that hosted Apollo and Space Shuttle missions going back to the heyday of human spaceflight.

How do I watch the launch?

Thousands of people are expected to watch the launch from the ground, according to local news reports.

If you can’t make it to Florida, SpaceX offers a webcast of their launches here.