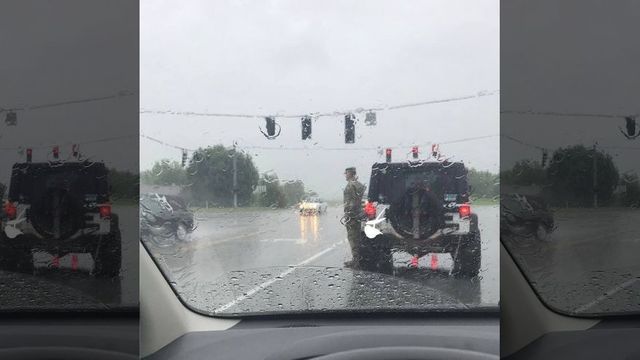 VINE GROVE, Ky. (WSVN) — As a funeral procession drove by in the pouring rain, Erin Hester captured a touching moment: a soldier got out of his car to salute.

“As soon as he got out of the car, it made me tear up,” Hester told Fox News.

Funeral processions have the right of way at intersections when accompanied by a police escort, according to Kentucky law.

But Hester said she’s noticed that people haven’t been pulling over and stopping for funeral processions lately, which made the soldier’s actions stand out all the more to her.

“It was amazing that he wasn’t only respecting the deceased, but also respecting a family that he doesn’t even know,” Hester said.

Hester posted the photo of the soldier to Facebook, where the post received over 176,000 likes and more than 123,000 shares.

“It was true honor, respect, integrity, and humanity,” Hester told Fox News. “I want people to see this.”

The soldier’s identity is still unknown.