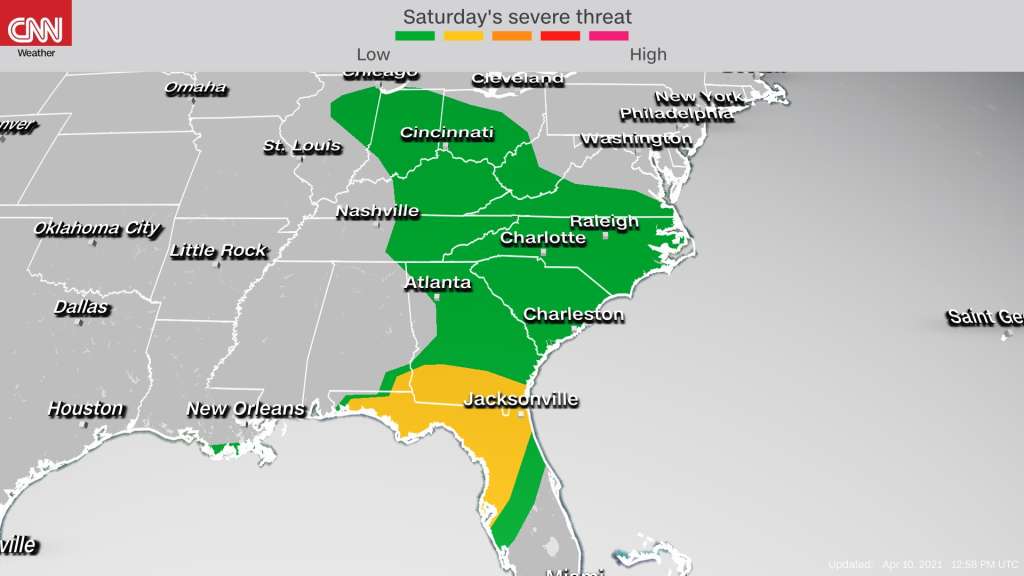 On Friday night, a 48-year-old Shreveport man was killed when a tree fell on a mobile home, the Caddo Parish Sheriff’s Office said in a release.

The greatest threat for severe storms has diminished. A level 2 out of 5 threat still existed across portions of southern Georgia and Florida on Saturday afternoon. A wider level 1 out of 5 threat extends north into the Ohio River Valley.

“Isolated damaging gusts and a tornado or two will be possible this afternoon with a squall line across north Florida and south Georgia, as well as farther north across the Carolinas into the Ohio Valley,” according to the Storm Prediction Center.

By Saturday night, the severe threat across much of the Eastern US will begin to diminish.

On Sunday, a level 2 out of 5 risk for severe storms continues across much of central Florida as a line of storms pushes through the region. The largest severe storm threat will be possible through the morning hours, when damaging wind gusts will be the main hazard; an isolated tornado or water spout cannot be ruled out.

“The National Weather Service out of Lake Charles will make a site assessment today and analyze radar damage to determine the size of the possible tornado,” Bellard said.

Power crews, public works and animal control officials were “working on debris clearance and restoring power to the area” on Saturday, said the statement.

The Shreveport man died when a tree hit his home Friday night around 6:30, said Caddo Parish Sheriff Steve Prator in a news release.

Deputies “found a large tree on top of the mobile home where two people had been inside,” the release said. The man was found inside, and the home had extensive damage inside and out, said the release.

A neighbor helped a woman out of the home after hearing the tree fall and then called 911, according to the release. The woman was not injured.

Sheriff’s deputies reported strong winds in the area at the time of the incident, said the release.