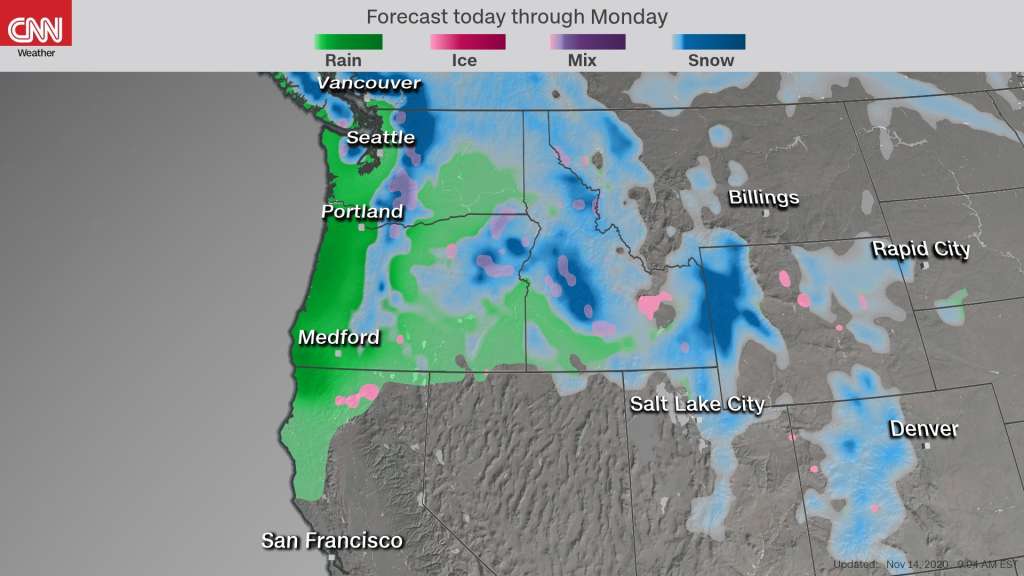 (CNN) — A series of storms are making their way from the Pacific Northwest to the Great Lakes region, and they will be bringing everything but the kitchen sink with them.

Rain, snow, tropical storm-force winds, and even tornadoes are all possible over the next 48 hours.

A cold front and associated low pressure system which originated in the Pacific Northwest Friday are moving into the Midwest Saturday and eventually the Northeast on Sunday.

First storm is on the move

Rain will be the more widespread concern Saturday from the Central Plains to the Great Lakes region, as the snow chances will remain limited to portions of the Upper Midwest including Minnesota, Wisconsin, and the UP of Michigan.

Enjoy the nice beautiful day Saturday in the Northeast because by Sunday soggy conditions will settle into Boston, New York, Philadelphia, and Washington DC mainly in the second half of the day.

There’s also a risk for severe storms on the southern edge of the cold front. Portions of Arkansas, Missouri, and eastern Oklahoma are under a slight risk, meaning there is the potential for a few tornadoes and damaging winds. Also, some hail cannot be ruled out as the storms move through the area Saturday afternoon and evening.

On Saturday evening, the National Weather Service issued a tornado watch through midnight CT for a large swath of central and southern Missouri, along with parts of northwest Arkansas, northeast Oklahoma and southeast Kansas. The advisory warned of the potential for tornadoes, damaging wind gusts and large hail.

Chicago is living up to its “Windy City” title Saturday. Ahead of and along the cold front there will be gusty conditions, allowing other cities to also claim that title today.

Nearly 60 million people are under wind alerts including Chicago, Cleveland, Detroit, Louisville, Tulsa, Oklahoma City, Santa Fe, and Denver. In general, sustained winds of 25 to 45 mph with gusts to 50 to 65 mph are forecast for much of the Midwest and Central Plains.

“Winds may occasionally gust well over 30 mph across portions of the Critical area, and very brief/localized Extremely Critical conditions cannot be completely ruled out,” the Storm Prediction Center said.

Next storm on the way

It’s looking more like “Snow-vember” for many areas of the western US lately. In just the last 48 hours Mt. Baker Ski Area in Washington has picked up 38 inches of snow. Just south of there, both Stevens Pass and Snoqualmie Pass picked up nearly 20 inches, and more is on the way.

“A series of weather systems will move across the area through the middle of next week with lowland rain, mountain snow and gusty winds at times,” the National Weather Service office in Seattle said. “Next system arriving tonight followed by a warm front later Monday and a cold front Tuesday.”

Winter weather alerts are in effect from Washington to Colorado as more snow and wintry mix conditions are expected Saturday through Saturday night.

Overall snowfall accumulations will be highest near the peak elevations of the Cascade and Rocky Mountains where as much as an additional foot of snow is possible through the weekend.

Rainfall will be along the coast of Washington and Oregon where 2 to 3 inches is forecast this weekend. However, other areas of the West Coast and Mountain West will see 1 to 2 inches of rain.

Keep in mind that any areas that receive those amounts of rain could also see localized flash flooding, especially along any of the numerous fire burn scar areas.