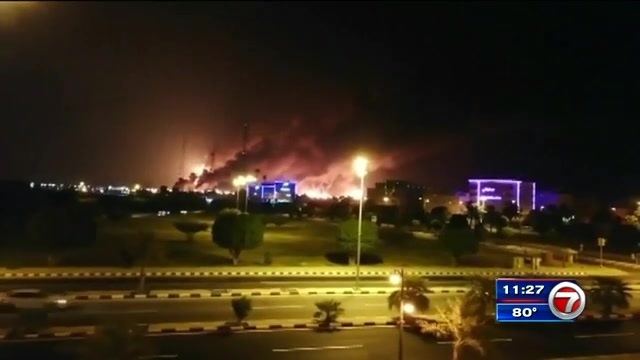 NEW YORK (AP) — The price of oil fell Wednesday after Saudi officials announced oil production halted by an attack on the heart of its oil industry would be fully restored within weeks.

Prices continued to slide even as the Saudi military blamed Iran for the attacks and U.S. Secretary of State Mike Pompeo called the strike and “act of war.”

The attack on Saudi Aramco’s processing facility in Abqaiq pushed crude prices up more than 14% Monday, a spike equivalent to the Iraq invasion of Kuwait before the 1991 Gulf War.

The attack led to a 5% drop in global output, but Saudi Arabia said it would be restored by the end of the month.

The International Energy Agency says that it’s not yet considered releasing emergency stocks of crude to offset the drop in output caused by the weekend attacks on Saudi oil installations, because oil markets remain well supplied.

Yemeni rebels claimed responsibility, but U.S. officials said they suspected Iran, Saudi Arabia’s regional rival. On Wednesday, the Saudis put on display what it said were Iranian cruise missile and drones used in the attack.

An escalation in tensions between the U.S. and Iran could push the oil price up again. The cost for a barrel of U.S. crude is up 30% this year and it has yet to return to price levels before the attack Monday, which exposed the vulnerability of Saudi Arabia’s key oil assets.

Saudi Arabia said Wednesday it was joining a U.S.-led coalition to secure the Mideast’s waterways.

The coalition, which includes Australia, Bahrain and the United Kingdom, was formed by the U.S. after attacks on oil tankers that American officials blame on Iran, as well as Iran’s seizure of tankers in the region. Iran denies any connection to the attacks on tankers.