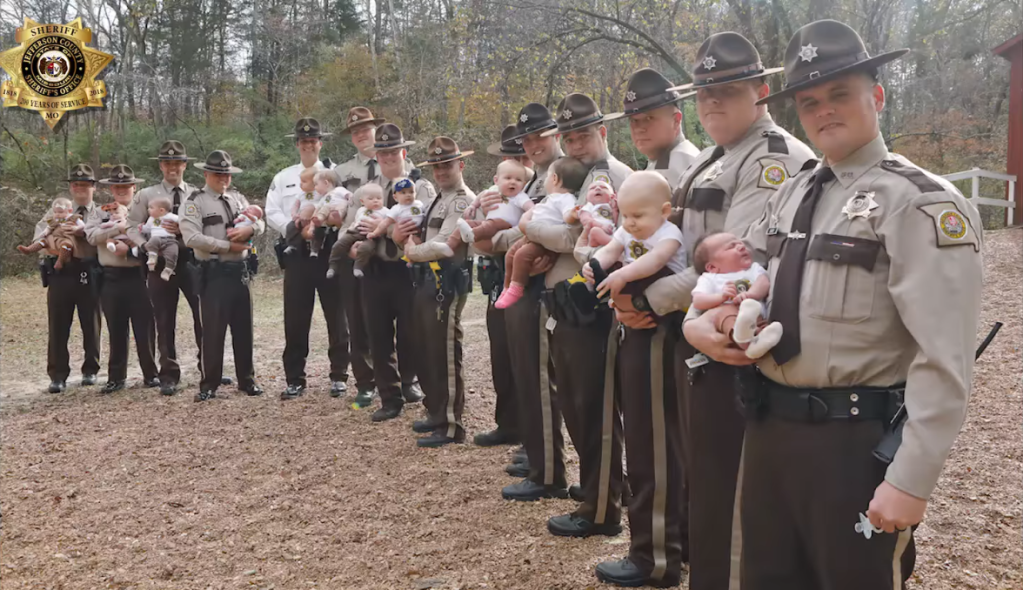 Fourteen of the 17 law enforcement dads, their wives and their babies gathered Monday at Sandy Creek Covered Bridge in Jefferson County for photos, the St. Louis Post-Dispatch reported. The babies were dressed in matching white onesies with deputy badges printed on them and brown pants and accessories. The two newest babies were just 10 days old.

This story’s being shared all over the world. It turns out, people love cute babies.We thought we'd share some behind-the-scenes footage of our #JeffCoBabyBoom photo shoot.Thanks to James Forbes and Rachel Rice from St. Louis Post-Dispatch for the incredible photos and the story: bit.ly/JeffCoBabyBoomAnd thanks to the police supporters in Jefferson County who, in a way, helped make all of this a reality.

“It’s important that we support our families,” Sheriff Dave Marshak said. “For us, this is good.”

“Holy cow” was what Capt. Andy Sides had to say about the infant influx. His second child was born six months ago.

A joke has been going around the department that the little ones are “Prop P babies.” Passed last year, the property tax increase provided resources for raises for the sheriff’s office. Prior to the passage of Proposition B, the starting salary for a deputy was $37,902. That entry-level salary jumped to $50,300.

“I think it’s more than a coincidence,” said Sgt. Matt Moore, whose little one, Luca, was born this year. “It certainly gives you a lot more flexibility in starting a family if you’ve got more income. Kids aren’t getting any cheaper these days.”

Before the vote, Marshak had warned of a possible “mass exodus” of law enforcement officers if the measure didn’t pass. Now, he said, new recruits are coming from neighboring communities.

Of course, Marshak is dealing with more deputies going on leave to spend time with their new babies.

“Oh my goodness!” Sides cooed at his 6-month-old son. “I love it, with both of our boys and my wife. I wouldn’t trade it for the world. It makes your bad days good when you come home.”