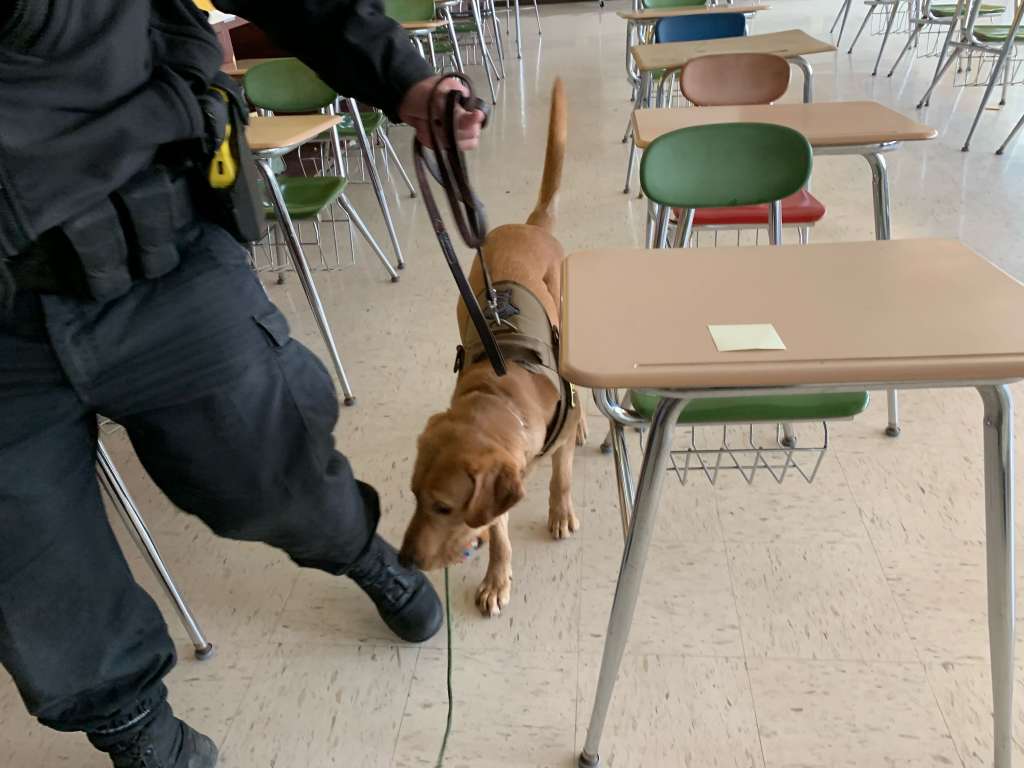 A pair of specially-trained dogs, 14-month-old labs named Huntah and Duke, began their training in May 2021, and now roam the halls of schools in the Freetown-Lakeville Regional School District.

The two were trained similarly to how narcotic dogs are, Darling said. Trainers took a mask which had been worn by a person who tested positive, and after using a UV light to kill the virus, the mask was cut into pieces and placed in a plastic bag, to help the scent become imprinted on the dogs.

Covid causes metabolic changes, which in turn produces a specific odor, according to FIU research, allowing for dogs like Huntah and Duke to be another way to help stop the spread, Darling said.

Another study from the London School of Hygiene and Tropical Medicine found dogs could detect Covid after six to eight weeks of training. In the preprint study, six dogs were able to accurately identify Covid 82-94% of the time.

While early results appear promising, it is likely too early to know whether Covid-sniffing dogs could actually be used as a tool to fight the pandemic in the real world.

“This could be compromised by the density of individuals in crowded spaces and whether well-ventilated external spaces, where odours are rapidly dispersed, compromise the ability of the dogs to detect individuals with low levels of infection,” Lawrence Young, a virologist at Warwick Medical School in the United Kingdom, said in a statement.

School superintendent Rick Medeiros first found out about Covid-detection dogs after reading a news release from the sheriff’s office in August announcing Huntah and Duke’s training completion, and decided to bring the dogs into his five schools.

“Our number one priority is to safely keep our students and staff in school for in-person learning and we believe this was just one more mitigation strategy to help us reach that goal,” Medeiros said.

With a district with nearly 3,000 students and 400 staff members, Medeiros said it was important the dogs don’t disrupt the school day. But after having the dogs come in, he reported it has been great for both students and staff.

“We saw it as a win-win,” Medeiros said.

The dogs come to the schools weekly and work to detect cases in empty classrooms, auditoriums, cafeterias and gymnasiums, Mederiros said. If Covid is detected, the authorities tell the health nurse who relays the information to the people affected.

When he first had the idea of bringing the dogs into the school, he wanted to assure parents and community members they were not going to line up all the kids and have the dogs go up and down the line.

“They come while students are in school, it’s really not disruptive or intimidating,” Medeiros said. “These were not drug sniffing dogs.”

Darling said both the Fairhaven and Norton school districts have reached out to the office to have their schools screened. Each district has five schools, meaning the dogs would screen 15 schools once a week, which is “perfectly feasible,” Darling said.

This service would come at no cost to the school.

As of now, the two dogs are only dedicated to Covid, but Darling said their duties may change depending on what’s needed. Other duties could include finding missing people, he said.

“They are officers just like anybody else,” Darling said. “We want to keep people safe, that’s what law enforcement is all about.”