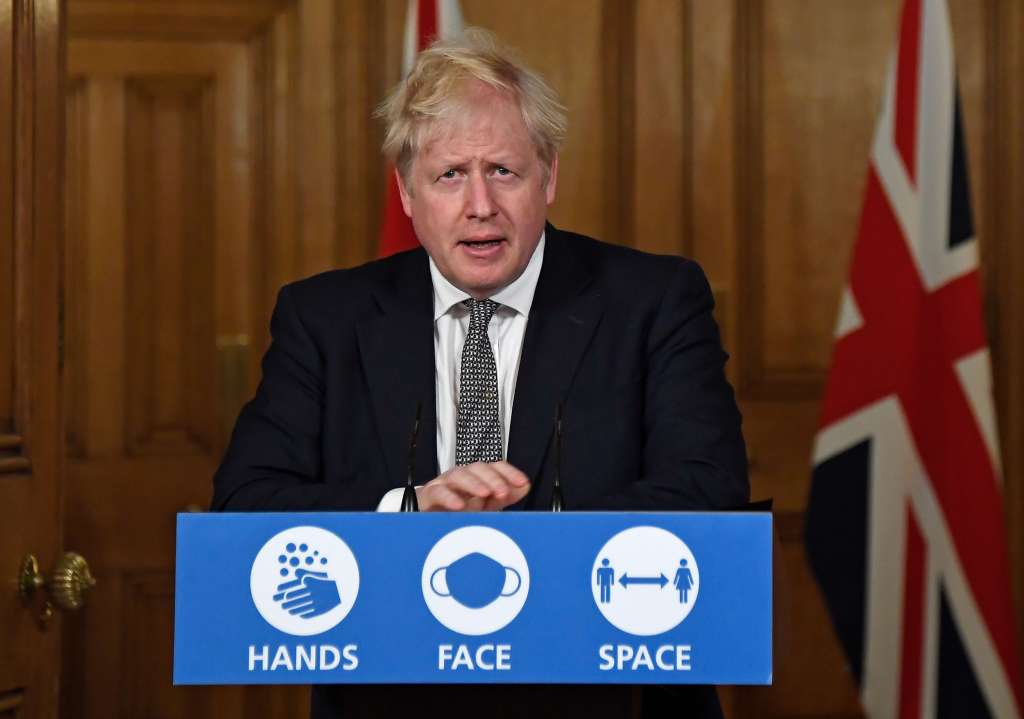 (CNN) — England will enter a second national lockdown in the coming days, British Prime Minister Boris Johnson has announced. The decision came hours after the UK passed the grim milestone of one million coronavirus cases.

The month-long shutdown will come into effect from Thursday after a parliamentary vote early next week, Johnson said during a news conference on Saturday evening.

“We must act now to contain the autumn surge,” he said.

Johnson was forced to make the announcement on Saturday after the government’s plans were leaked to numerous national newspapers the previous evening. The plan had been initially to announce the measures on Monday.

The strict lockdown will see the closure of pubs, restaurants and non-essential businesses, including hair salons and gyms. Schools, universities and playgrounds will stay open.

People will only be able to leave their homes for specific reasons: education, work (if they are unable to work from home), to shop for food, for health reasons, or for exercise and recreation outdoors, either with that person’s household or with one person from another household.

The government is discouraging all non-essential travel, though people will still be able to travel abroad for work, providing they follow England’s quarantine rules upon their return. The measures will only apply to England, as healthcare is handled by the devolved governments of Scotland, Wales and Northern Ireland.

The new shutdown will remain in place until December 2, at which point Johnson hopes the virus will be sufficiently under control to enable England to tackle the virus, once again, on a region-by-region basis.

The Prime Minister, who spent the afternoon discussing the matter with his cabinet, previously said he wanted to “avoid the misery of another lockdown,” but had not ruled it out.

He has been under pressure for weeks as the UK’s top scientists warned that a lockdown was needed in England, instead of the current localized system.

The move comes after weeks of sharply rising infections. There have now been more than 1 million confirmed cases in UK, with 21,915 new cases reported on Saturday, taking the total to 1,011,660. There were 326 new deaths, bringing the death toll to 46,555.

The R number (reproduction number) is above 1 everywhere and it is growing more in areas with lower incidence rates. The decision for more severe restrictions came as Johnson’s cabinet was advised that if no action was taken, the National Health Service’s bed capacity would be surpassed by the first week of December.

Calum Semple, a member of the government’s Scientific Advisory Group for Emergencies (SAGE) and a consultant respiratory pediatrician, said earlier on Saturday that tighter restrictions were needed because the virus was “running riot” across the country.

Elsewhere in Europe, other countries continue to battle rising cases.

Germany reported a record number of cases for a fourth day in a row on Saturday with 19,059 new infections in 24 hours, according to the country’s disease control agency, the Robert Koch Institute (RKI).

Germany will impose wide-ranging lockdown measures from Monday in an attempt to slow down the spread of the coronavirus, its government decided on Wednesday night. Bars, restaurants and cafes will remain shut except for takeout. Theaters and concert halls will be closed, as will amateur and recreational sports facilities.

Belgium, which is to send patients to Germany for treatment as hospital admissions soar, will impose sweeping new lockdown measures for six weeks starting Sunday night.

Belgium has the second highest number of infections per 100,000 people in the European Union and UK, after the Czech Republic.

“We are going back into a strict lockdown, which has only one purpose: to ensure that our healthcare system does not collapse,” said Belgian Prime Minister Alexander De Croo as he announced the restrictions on Friday.

The measures include the closure of non-essential stores, hair salons and restaurants; mandatory mask-wearing for outdoor gatherings of up to four people and a ban on mixing indoors except with a “cuddle contact,” or person in a support bubble. The rules will be place until December 13. Schools will remain on vacation until November 15.

France entered a second national lockdown on Friday that will last an initial four weeks, until December 1 at “minimum.” The rules will be more relaxed than during spring’s lockdown, with school and workplaces remaining open.

However, people will only be allowed outside “to work, to go to a medical appointment, to care for a relative, to shop for essential goods and to get some air,” said French President Emmanuel Macron.

“The virus is circulating at a speed that even the most pessimistic had not predicted,” Macron added.

Greece has also expanded its containment measures from high-risk areas to the whole country. In a televised address on Saturday, Prime Minister Kyriakos Mitsotakis outlined a series of measures for the whole country that will take effect on Tuesday November 3 and last for a month.

There will be a night-time curfew from midnight to 5 a.m., mask use will be mandatory everywhere, and more people will be encouraged to work from home.

The number of coronavirus cases in Europe since the beginning of the pandemic has exceeded the 10 million mark, with more than 1.5 million cases confirmed last week, World Health Organization’s Europe director Hans Kluge on Thursday.

During a meeting with European Health Ministers, Kluge said hospitalizations had risen to “levels unseen since the spring,” with deaths rising by 32% across the region last week.

“Europe is at the epicenter of this pandemic once again,” Kluge said.

“At the risk of sounding alarmist, I must express our very real concern and convey our steadfast commitment to stand beside you and support you as best we can.”

Kluge said lockdowns “need not mean what they meant in March or April” and that indirect economic impacts must be considered.

But for much of Europe, this new phase of lockdown looks set to be even harder than what came before.