Christmas highs reach July levels in Texas and Oklahoma, while snow blankets much of the West 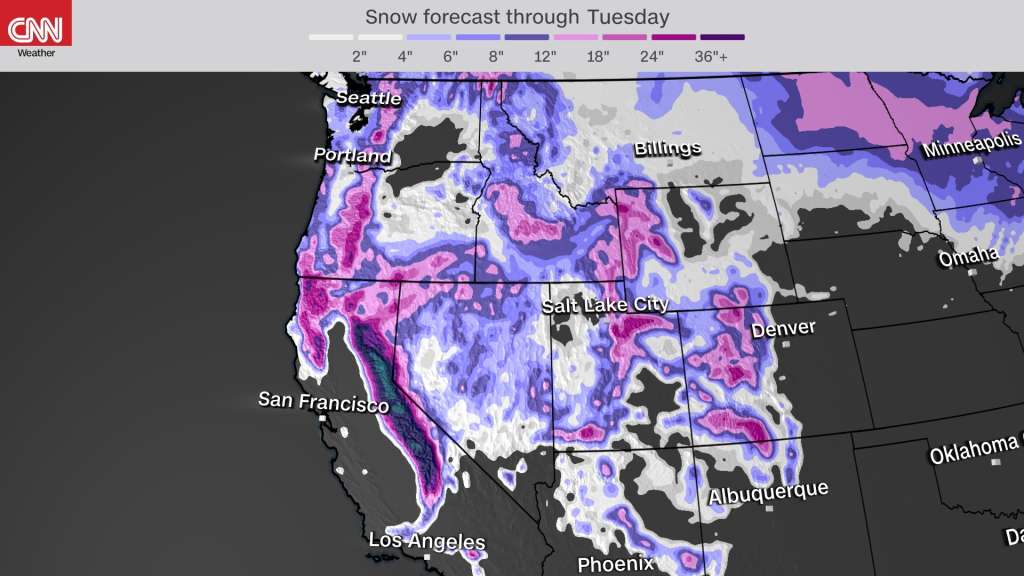 (CNN) — Christmas Day doesn’t feel much like winter for much of the South and Southeast.

More than 200 records may be broken Christmas Day through Wednesday from Texas to the southeastern US as warm air pushes into the region, bringing spring- and summerlike temperatures. Many locations, including Dallas, Houston and Austin are expected to break daily record highs, but high-temperature records for the entire month of December could also be broken.

Along with the warm temperatures, level 2 of 3 critical fire danger has been issued by the Storm Prediction Center for parts of west Texas and Oklahoma and east Colorado on Sunday due to minimal rain chances, sustained winds up to 25 mph and very low relative humidity that will raise wildfire concerns. The warm weather trend will continue through Wednesday before temperatures lower slightly, but highs will remain above average all week.

Contrasting the spring- and summer-like temperatures across the South, the West is seeing rounds of coastal rain and heavy high elevation snowfall.

Multiple rounds of snow are impacting the West from a Christmas Day system, contributing to significant mountain snowfall and lower elevation rainfall on the West Coast.

More than 6 million people across the Western US are under a winter storm warning.

Winter storm warnings are reaching as far south as the San Bernardino and Riverside County Mountains.

This is due to Arctic air pushing into the Pacific Northwest, which is causing winter storm alerts to reach near the coast, producing a rare White Christmas for places like Seattle and Portland.

Seattle has only seen measurable snow on Christmas Day nine times in 127 years of records. Holiday weekend travel conditions in the region could be dangerous due to tall snowdrifts and whiteout conditions.

Oregon is in a state of emergency through January 3 due to the potential for hazardous winter weather conditions and sustained subfreezing temperatures.

The system that is causing heavy snow and rainfall to the West will head toward the upper Midwest, bringing heavy snowfall to much of the area. Winter weather watches have already been issued, and some places can see up to a foot of snowfall.

The Northeast is also not free from inclement weather. Winter weather advisories are in effect for parts of the Northeast, largely due to freezing rain.

Freezing rain may create slippery and hazardous road conditions in major cities like Boston. New England could see more widespread snowfall by Saturday night. Some parts of the northeast could see up to half an inch of ice accumulation.