Brazil ex-president, out of jail, vows to make ‘lives hell’ 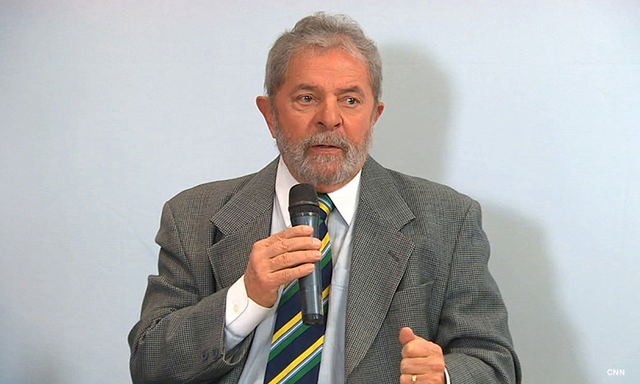 “They don’t know what it is to face a 74-year-old passionate man,” said da Silva, who governed Brazil from 2003 to 2010, and became one of the world’s most popular politicians before being ensnared in corruption scandals, before cheering supporters late Friday.

Da Silva was the unquestioned star of the conference of his Workers’ Party, which started Friday in Sao Paulo. Many still think he could be the leftist party’s standard-bearer once again in 2022 — when he’ll be a 77-year-old cancer survivor who is currently barred from seeking office due to a corruption conviction.

Da Silva left jail earlier this month after 19 months in a cell when the Supreme Court ruled that a person can be imprisoned only after all the appeals have been exhausted.

Brazil’s ex-president is still appealing two convictions for allegedly receiving favors from government contractors involving properties he used or was considering buying. If he loses his appeals in either conviction, he could be locked up again.

Da Silva has denied any wrongdoing and accuses prosecutors and Sergio Moro, then a judge and now justice minister in the government of President Jair Bolsonaro, of manipulating the case against him.

“Today I feel much stronger than the day I surrendered to the federal police,” da Silva said. “I am more willing to fight for this country than in any other moment. You will see me traveling around this country, not only making their lives hell, but also defending the Brazilian people who don’t deserve to experience what they are experiencing.”

Most analysts see da Silva as a potential kingmaker and strategist for the party he was instrumental in transforming — one who can appeal to a wide range of voters .

“Don’t expect narrow-minded politics to come from his head. Radicalism is not in his spirit,” his former chief-of-staff and senator, Jaques Wagner, told The Associated Press. He believes da Silva should open the way for a new generation of politicians from Brazil’s Northeast to take center stage in the next presidential election.

But Raul Pont, a member of the Workers’ Party and former mayor of Porto Alegre, thinks it is “too soon” to rule da Silva out of the presidential ticket.

“What he will start doing now is organizing a progressive movement, one that goes beyond our party. Then we will see (if he will run), in case he is eligible,” he said.

Da Silva is hoping the Supreme Court will deliver a ruling that could cancel the cases against him — and that would legally open the path to another presidential run.

The former union leader took a party some politicians once regarded as a radical fringe and brought it to power in 2003, winning adulation from millions for presiding over more than a decade of prosperity and reduced poverty with policies that were far more business-friendly than many foes had feared.

That record was increasingly stained by corruption scandals, and the 80% approval ratings he enjoyed on leaving office in 2010 have slipped to about 40% today — even so, better than those of Bolsonaro.

Still, many on the left still see him as the only politician who can today organize the opposition to Brazil’s current far-right president, who last year ended the Workers’ Party string of victory in four consecutive elections.

“I am the biggest polarizer of this country. What I want is to polarize,” he said.

The left came out weakened from the last election, and Bolsonaro, a former army captain who much like U.S. President Donald Trump has broken free from conventional ways of governing, has further destabilized the opposition, some analysts believe.

Others argue the opposition has remained quieter than expected because the Bolsonaro administration is often proving to be its own worst enemy.

The Workers’ Party remains the biggest party in the lower house, with 54 seats. But even under da Silva, it required alliances with smaller parties to govern.

Political analyst Fábio Kerche, at the Federal University of Rio de Janeiro state, said da Silva has already sent signals he would try to reach beyond the party, to the center and center right, possibly building a broader democratic front against Bolsonaro.

He noted that da Silva has shown the ability to attract a broad range of political allies and voters alike, and said, “Once again, this will be his mission.”

On Friday, da Silva indirectly acknowledged this, saying stopping Bolsonaro “is not a task for a single party.”