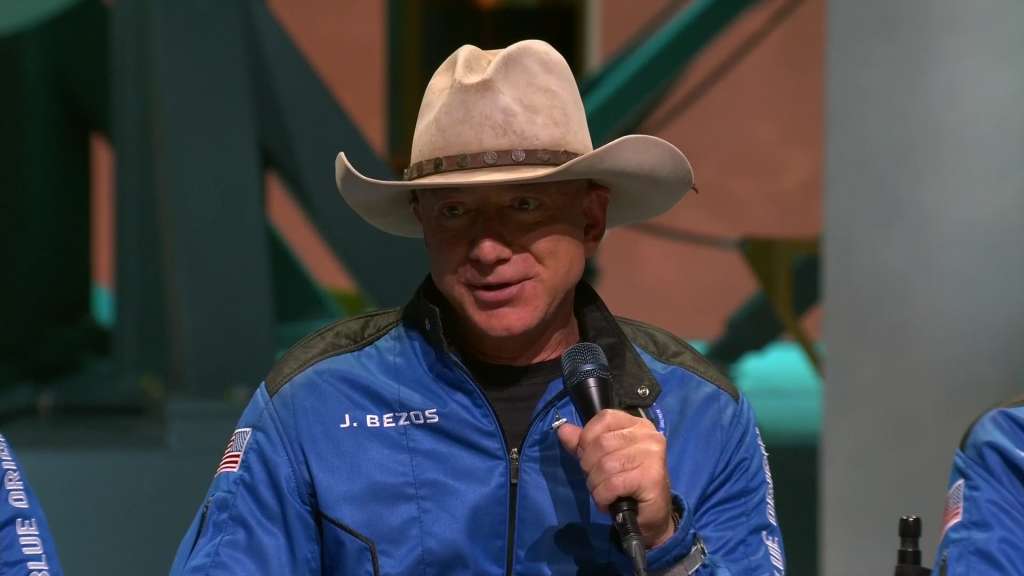 NEW YORK (AP) — The world’s richest man wanted to say thanks to the people who made his brief trip into space Tuesday possible.

But for some, Amazon founder Jeff Bezos’ expression of gratitude went over like a lead rocket.

“I want to thank every Amazon employee, and every Amazon customer because you guys paid for all this,” the 57-year-old Bezos said during a news conference Tuesday after becoming the second billionaire in just over a week to ride in his own spacecraft.

Bezos built Amazon into a shopping and entertainment behemoth but has faced increasing activism within his own workforce and stepped up pressure from critics to improve working conditions.

Labor groups and Amazon workers have claimed that the company offers its hourly employees not enough break times, puts too much reliance on rigid productivity metrics and has unsafe working conditions. An effort to unionize workers at an Amazon warehouse in Alabama failed earlier this year.

Robert Reich, former secretary of labor under President Bill Clinton and a professor of public policy at University of California, Berkeley, wrote on Twitter that Bezos has crushed unionizing attempts for decades.

“Amazon workers don’t need Bezos to thank them. They need him to stop union busting — and pay them what they deserve,” Reich wrote.

Bezos stepped down as Amazon CEO in July, allowing him more time for side projects including his space exploration company Blue Origin. He has said he finances the rocket company by selling $1 billion in Amazon stock each year.

After the spaceflight, Bezos awarded $100 million donations to both D.C. chef Jose Andres and CNN contributor Van Jones to put towards any charity or nonprofit of their choice.

Nevertheless, Rep Earl Blumenauer, who is on the tax-writing Ways and Means Committee, proposed on Tuesday legislation that would tax space travel for non-scientific research purposes.

“Space exploration isn’t a tax-free holiday for the wealthy,” said Blumenauer, an Oregon Democrat. “Just as normal Americans pay taxes when they buy airline tickets, billionaires who fly into space to produce nothing of scientific value should do the same, and then some.”

Others tied his spaceflight to reports that Bezos hasn’t paid his fair share of taxes. According to the nonprofit investigative journalism organization ProPublica, Bezos paid no income tax in 2007 and 2011.

“Jeff Bezos forgot to thank all the hardworking Americans who actually paid taxes to keep this country running while he and Amazon paid nothing,” Sen. Elizabeth Warren, D-Mass., tweeted.

Allen Adamson, co-founder of marketing consultancy Metaforce, says it’s challenging for Bezos to say where the money from the space trip is coming from without being offensive. He says he should have left out those comments and focused on thanking the Blue Origin team.

“For people who have an issue with inequality and his compensation versus the average employee compensation, this was rocket fuel,” Adamson said.