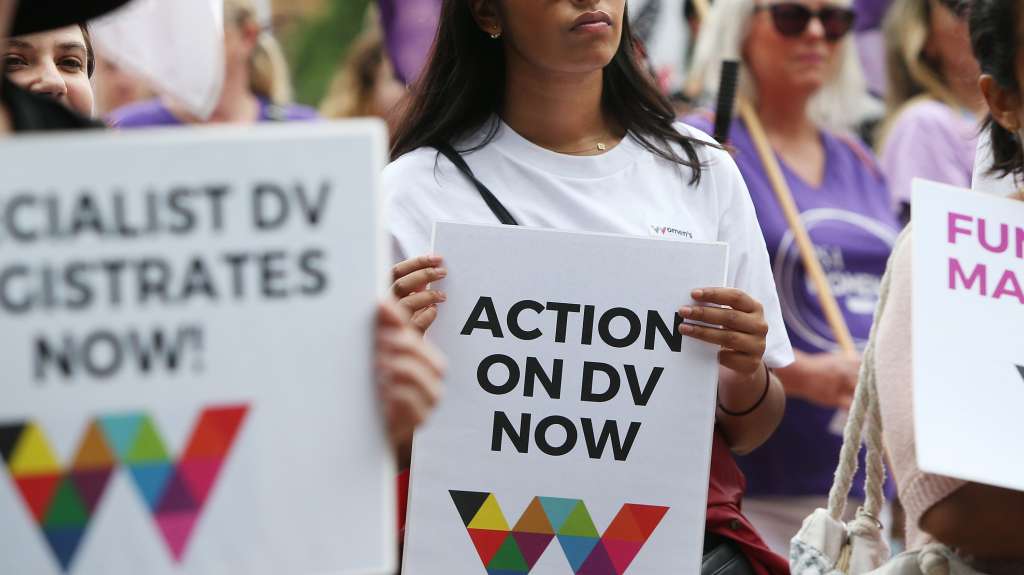 SYDNEY, AUSTRALIA - MARCH 07: Women hold signs referencing action against domestic violence as they gather in Hyde Park during the Sydney International Women's Day march on March 07, 2020 in Sydney, Australia. International Women's Day is celebrated around the world on March 8 every year and is the focal point for the women's rights movement. (Photo by Lisa Maree Williams/Getty Images)

From Tuesday, victims can apply for a payment of 5,000 Australian dollars ($3,700), which includes cash and direct payments for expenses such as school fees.

The scheme is open to all genders. However, women are expected to make up the bulk of applicants in a country where one woman is killed by a partner every nine days, according to government data.

While the payment has been welcomed by advocates, some say it doesn’t address the root causes of family violence in Australia.

Mary Crooks, executive director of the Victorian Women’s Trust, says the country needs to have a larger debate about the “blokey” culture that places men at the head of the family and in most positions of government and corporate power.

She also said questions need to be asked about why women are the ones being forced to leave the family home.

“There is a big moral and ethical and policy issue here. Why does she have to further go through that extraordinary trauma and dislocation to her life when she hasn’t, in fact, been the one perpetrating the harm?” Crooks said. “Why does she have to be the one to pick up the kids and pets quickly, and possibly not be able to get a place in a refuge?”

Australia scores poorly on international rankings of gender equality, which can contribute to an uneven power dynamic in relationships and make women economically vulnerable.

At 13.4%, Australia’s gender pay gap is at a record low, the government said in its Women’s Budget Statement in May, as it committed to further bridging the divide.

However, figures show the pandemic worsened the economic disparity in Australia as more women lost their jobs or had their hours cut during local lockdowns than men.

And like many countries, the pandemic also led to an uptick in Australian family violence.

According to the government, two-thirds of women who experienced physical or sexual violence by a current or former partner during the pandemic said the violence had started or increased during the crisis.

Lockdowns prevented many women from leaving abusive relationships — and now, even as Covid-19 restrictions ease, a housing boom that has pushed up rental costs has made it even harder.

Authorities are attempting to fill the gap.

Annabelle Daniel, chair of Domestic Violence NSW, welcomed the move, which she said would help address the urgent need for extra places of safety in rural and regional areas.

“We know the numbers of people in need being turned away are continuously increasing due to lack of space. When we raise awareness about domestic and family violence, women raise their hands for help,” she said in a statement.

A fraction of the costs

In recent years, the Australian government has attempted to address family violence with a series of national plans — but the rates remain persistently high and outdated attitudes have been hard to shake.

For example, a 2018 survey by Australia’s national research organization found one in five Australians believe examples of domestic violence are “normal reactions to day-to-day stress and frustration.”

Indigenous leaders say the plans have been so ineffective for their community that they want a separate national plan.

According to research carried out by Our Watch, Aboriginal and Torres Strait Islander women suffer higher rates of violence than non-Indigenous women and are 11 times more likely to die from the abuse.

“Worse, we are often misidentified as the perpetrators of family violence and criminalised. We are terrorised with the threat of having our children removed,” she wrote.

Crooks, from Victorian Women’s Trust, said as hard as it is for White women to leave a violent home, embedded biases in the criminal justice and policing systems make it even harder for Indigenous women.

The $5,000 Escaping Violence Payment is part of a women’s safety package worth $1.1 billion Australian dollars ($820 million) announced by the government in May.

UnitingCare Australia, the agency tasked with administering a two-year trial program, said it was receiving calls and messages about how to apply even before applications opened Tuesday.

But while the payment will go some way to helping women escape violence, the amount is a fraction of estimates of how much victims pay to find safety.

In 2017, the Australian Council of Trade Unions found it cost an average of $18,000 Australian dollars ($14,000), including hiring a lawyer and moving company, as well as setting up a new home with food and appliances. The ACTU said that cost is likely to be even higher in 2021.