A father was choked to death by the NYPD 42 years ago. His family has never recovered 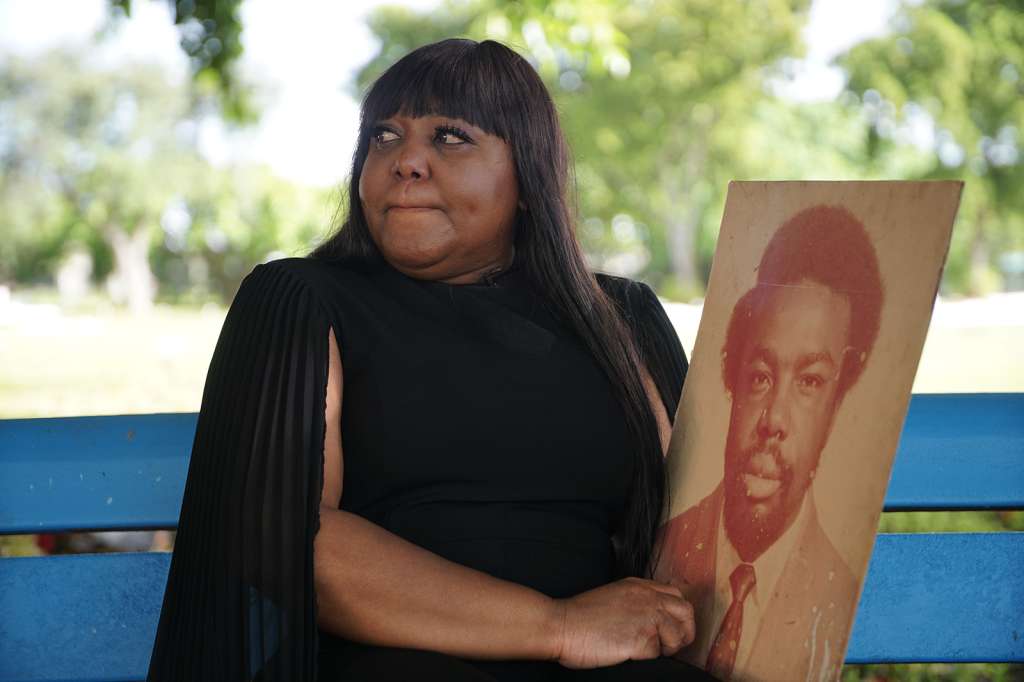 (CNN) — On June 14, Brooklyn hosted  the Black Trans Life Matters rally, one of the largest protests  following  George Floyd’s  death.  As  chants  of  “I Can’t Breathe”  echoed down Eastern Parkway, thousands of  demonstrators  gathered outside of the Brooklyn Museum to protest the infamous knee-on-neck hold that ended Floyd’s life.

On that same day 42 years ago, less than half a mile away, a different Black man found his life cut short by a police chokehold.

Arthur Miller’s death has  faded into obscurity, but his family still suffers the devastation that it wrought. Miller’s daughter,  LoLisa  Miller-Bradford, told CNN that  watching George Floyd’s death  on television  brought her back to that awful June day.

“Every time it happens, I just revert back to that 8-and-a-half-year-old  little girl,”  LoLisa said. ”I see all of the police cars and the lights in the crowd. I see it all.”

The death of Miller, a Black businessman and community leader who was choked to death by NYPD officers in June 1978, became a flashpoint for Brooklyn activists. His death spurred a summer of protests and the formation of “cop watches” – groups of Brooklyn residents monitoring police behavior while donning their signature green jackets emblazoned with Miller’s face. They now remain largely forgotten outside of Brooklyn.

With no cellphones to capture video or social media to amplify the incident, accounts of Miller’s death exist  in newspaper clippings and the memories of those who witnessed it.

Arthur Miller was born in Nassau, Bahamas, to a family who immigrated to America when he was a teenager.

After arriving in Crown Heights, Brooklyn — a neighborhood that has long served as a hub for Caribbean immigrants — Miller thrived as an entrepreneur, his hands busy with several business and community projects. Construction became Miller’s primary trade, but he also owned a grocery store on Nostrand Avenue.

Miller — who played the congas, trumpet and guitar to the delight of his family — also excelled as a community leader. He led Four Block Association, a group that received a federal grant to hire local residents as a trained neighborhood watch.

“This was a guy who had never should have been attacked by the police,” Bob Law, a Crown Heights activist and DJ, told the Brooklyn Historical Society.

By spring of 1978, Miller was planning to open up  a club on Nostrand Avenue, one that would include a skating rink for children and a nightclub for adults.

On June 14, 1978, Sam Miller, Arthur’s brother, was pulled over by police on Nostrand Avenue while driving one of Arthur’s trucks. Police made the stop to serve a previous violation for littering, which led to police discovering  Sam had a suspended license, according to an 1983 NYPD report on cases of alleged police brutality published in a Congressional report.

The NYPD report says Arthur was attempting to assist Sam before Sam fled the scene chased by two officers. In the report, the NYPD claims Miller then “became more violent in protesting his brother’s arrest” and that two officers attempted to arrest Arthur but he “violently resisted efforts to handcuff him.”

According to the NYPD account: “All witnesses agreed that a violent struggle took place, but witnesses disagreed as to whether Miller was struck by nightsticks, whether the police had headlocks on Miller, and whether a nightstick was ever locked on Arthur Miller’s neck.”

One eyewitness told the New York Daily News (in a report republished by the Philadelphia Daily News) that  Arthur approached the officers with his hands raised in the air, saying “can’t we talk this over?” According to the same eyewitness, as  Miller raised his hands, officers saw a gun in his waistband — one he was legally permitted to carry — and charged.

“This white detective runs up behind Arthur and shoves him down. They handcuff Arthur’s hands behind his back,” the witness said. ”Then they got him kneeling on the sidewalk here, and one of them comes from behind and hold a nightstick across Miller’s Adam’s apple. The rest of the cops, they start beatin’ on him.”

Witnesses  said they could  see foam coming from Miller’s mouth as he was shoved into a police car  with his legs sticking out of the vehicle’s window, according to a New York Times report. According to the NYPD report, “Officers said Miller was conscious and struggling, but some civilian witnesses said he appeared to be unconscious.”

When  Arthur’s wife,  Florence Miller, found him  at the hospital, he had multiple pairs of broken handcuffs on his wrist, according to LoLisa.

“He was fighting for his life,” she said through tears. “Trying to make it back home to his wife and his children.”

Miller’s death sent shockwaves throughout Brooklyn. Protests quickly formed under the leadership of the “Black United Front,” led by Reverend Herbert Daughtry, and  occurred throughout the summer of 1978.

“We are not satisfied that police are going to stop killing our model citizens like Arthur Miller,” Daughtry said to a crowd in downtown Manhattan while standing on a police car, according to a New York Times report.

“If there are people who acted in an illegal way, they will be punished,” Koch told the New York Times.

After hearing testimony from 77 witnesses, a grand jury declined to recommend criminal charges against the officers. In a press release following the Grand Jury’s deliberation, the Kings County District Attorney’s Office described the  crushing of  Miller’s larynx  as a  “tragic unforeseeable accident which occurred during a lawful arrest,” according to the NYPD report to Congress. It added that “Arthur Miller was not savagely beaten by anyone.”

The NYPD report to Congress concluded: “The United States Attorney for the Eastern District conducted an investigation and reached essentially the same conclusion as the Brooklyn District Attorney’s Office. A US Justice Department investigation into this matter found no police wrongdoing.”

No officers involved were ever fired or criminally charged for Miller’s death.

Miller’s death and the protest movement it spurred is remembered as a formative moment for a generation of Black politicians and activists coming of age in New York.

“Arthur Miller’s death left a large imprint on our community, well before there were hashtags and social media tags to amplify the issues of the day,” Congresswoman Yvette D. Clarke told CNN. “His murder sparked activism in our community because none of us wanted this type of gut-wrenching grief, violence, devastation and loss to take place again.”

But as the marches petered out, Miller’s name faded from memory.

“It [the protests] went nowhere,” Florence told the Brooklyn Historical Society in a 2017 interview. “If there were positive results, I didn’t see them.”

“They destroyed my family,” LoLisa said. “A lot of us have never been the same.”

In an oral history interview with the Brooklyn Historical Society, Florence, who never remarried and passed away in 2019, recalled the long-term devastation that her husband’s death had on the family.

Florence says that Arthur’s brother, Joseph, who witnessed the death, was continuously harassed by the police after the killing. The incident turned Joseph, who was never much of a drinker before, into an alcoholic, she says.

“The whole incident just turned him inside out,” Florence said.

Arthur’s son, Arthur Miller 3rd, was 12 years old when his father died. At the funeral, Artie, as he is known to his family, had to be physically restrained from jumping into the grave as the casket was descending, according to LoLisa.

“He lost a lot of interest in things. He wanted to play basketball. He was good at it, but he didn’t seem to want it anymore. That wasn’t important to him anymore,” Florence said. “It changed their lives in a negative way. It took away their childhood. It left an empty void.”

Photos of the protests that followed Miller’s death depict a largely Black crowd, in contrast to the multi-racial protests that have sprung from the wake of George Floyd’s death.

For some Black leaders, one explanation lies in the pervasiveness of cell phone videos, including the one that recorded Floyd’s death.

“People can actually witness what many people in Black communities have been saying, have been screaming about, for decades,” said Thenjiwe McHarris, a strategist at Movement for Black Lives. “You now have millions of people that cannot deny what’s happening to Black people.”

“I am certain that many Black deaths would have gone unspoken, uninvestigated and ignored if it weren’t for video evidence of these horrific cases,” said Congresswoman Clarke.

“For our community, it’s more enraging because this is what we’ve been saying forever,” said Lumumba Akinwole Bandele, an organizer with the Movement for Black lives, who was a young child in Brooklyn when Miller died. ”Our stories are never believed.”

Reverend Daughtry, 89, says he’s in awe of young activists he sees on the streets today. “These people are out there in the street and they’re putting their lives on the line for a cause.”

He says his wife has prohibited him from protesting, and she has threatened to leave him if he joins the protests.

“I’m 89 years old, I can’t afford to get kicked out,” said Reverend Daughtry. “My marching ability has been seriously reduced.”

At Miller’s grave, in a small cemetery in Dania Beach, Florida, LoLisa stands beside her older sister, Roz Miller-Lloyd. (All three surviving sisters kept the Miller last name after they got married in honor of their father.)

“It doesn’t get any easier,” LoLisa said through tears. “So many Black families have been ruined and broken by the system. They have failed us, and they continue to fail us,” LoLisa said.

“There are changes coming,” Roz said.

“Oh, yes, there are changes coming,” LoLisa said in agreement.