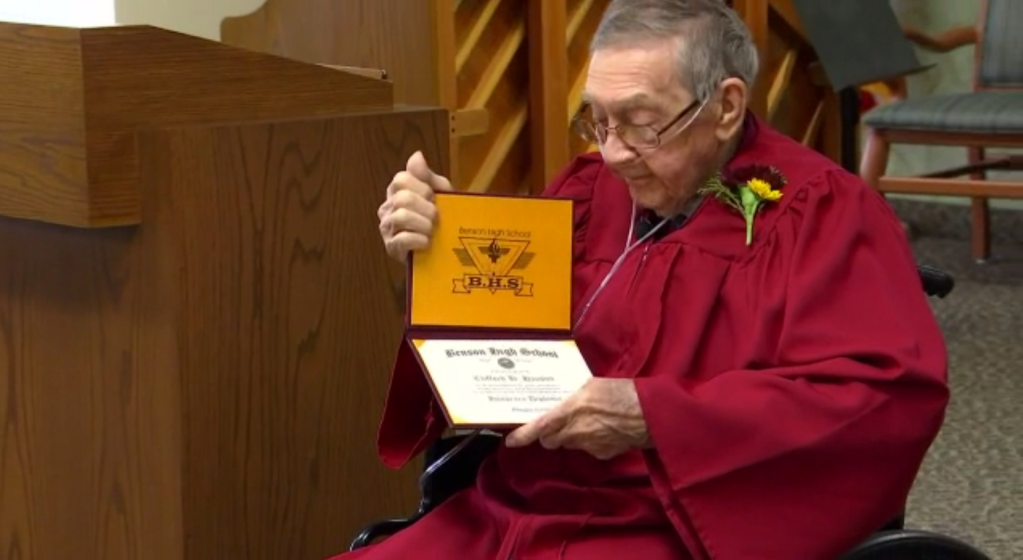 MINNEAPOLIS (CNN) — After 91 years, a Buffalo man has a title he never thought he’d receive.

Clifford Hanson grew up the youngest boy on a livestock farm in Benson, Minnesota. After the eighth grade, he stopped going to school to help his dad who was in failing health — a story that decades later touched the heart of his nurse at Lake Ridge Care Center in Buffalo.

“He was really defined by that moment of having to drop out of school, so I got to work thinking how can I change that thinking and celebrate how much he accomplished,” said Tamara Pierre of Lake Ridge Care Center.

Even though a young Cliff had to make some tough decisions, he still kept learning. He saved the family farm, married his bride, became a welder and bus driver — with an acute mechanical mind.

“He’s a really smart man, really good values, he can do anything you put in front of him,” said Andrew Hanson, Cliff’s son.

So the staff at Lake Ridge Care Center contacted Benson High School, who decided the time had finally come for Cliff to receive his diploma.

“He’s an amazing guy and I think he worked really hard to earn this,” said Ellie Hanson, Cliff’s grandaughter.

Cliff Hanson’s had the knowledge for years, now he has a paper to prove it.