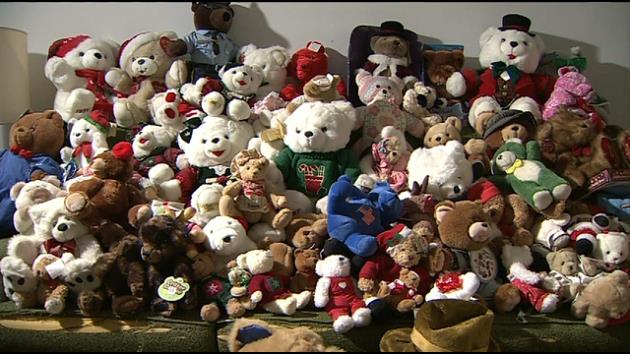 WSVN — She spent her life collecting teddy bears. Then she passed away and her son had an idea: to get those bears to kids for Christmas. Who could pull it all together? He made the call to Help Me Howard with Patrick Fraser.

When she was 6 years old, Ed’s mother Katherine got a gift she never forgot. She wrote about it.

As an adult, not only did Katherine start collecting teddy bears, she kept track of each one in this book.

Edward Watson: “Every bear came with a tag, and my mom would number that bear and then write in her book who she got it from and what reason.”

As Ed and other family members gave Katherine teddy bears, her collection grew to 900, filling walls in her home.

Edward Watson: “You know, it was a hobby. Oh, she loved it tremendously.”

In 2012, Ed’s mother passed away. This year, his father died. Ed now has to sell his parents’ house, and wants to find homes for the bears.

Edward Watson: “We want them to go to good use. You know, put a smile on a kid’s face.”

A few hundred went to a museum in Colorado. Family members took some. Now, 130 are here, and Ed wants children to have them for Christmas.

Edward Watson: “I watch the segment a lot on TV, and I thought of, you know, ‘Let me get hold of Patrick,’ and I tried e-mailing him, and I got a response.”

A few days later, we came by to pick up the bears, each one collected by Ed’s mother, and each one given to her by someone who loved her. As Ed helped us load them up, that realization hit them.

Edward Watson “It’s a part of my family and history.”

After we left, we put a picture of me with the bears on Facebook. Within minutes, we were contacted by the Lotus House, a homeless shelter for mothers and children in Overtown, asking for Ed’s gift. So we took them over there.

Runisha and her baby were sleeping on the street. So was Dolly and her two children. Then the Lotus House took them in.

The Lotus House helped them find jobs and create a new life. Now, on Christmas morning, the mothers here will be able to give teddy bears to the 75 children living in the homeless shelter.

Runisha Johnson: “Now, those teddy bears are going to go to a child. That teddy bear will mean a lot, and brighten their Christmas up, and we want every child at the Lotus House to feel at home, ’cause they are loved.”

Ed’s mother spent her life collecting these teddy bears. Now with this gift, children who were homeless will have the bears, as they start their new lives.

Edward Watson: “That’s why I am doing it. My mom would want that done, so they’re going to enjoy it like we did for years.”

What a generous gesture by Ed, because a lot of parents can’t afford presents, and a lot of organizations are now scrambling to collect toys for kids. If you can help one of them, if you can help a child smile on Christmas morning, you know they will appreciate it. And if you want to make sure the homeless children at the Lotus house get gifts for Christmas, the link to contact them is at the bottom of this Help Me Howard story.

A bear of a problem threatening your holiday spirit? Need the perfect gift? A solution: contact us. We don’t have reindeer, but we do have a rein on legal issues, which we can unwrap up for you.