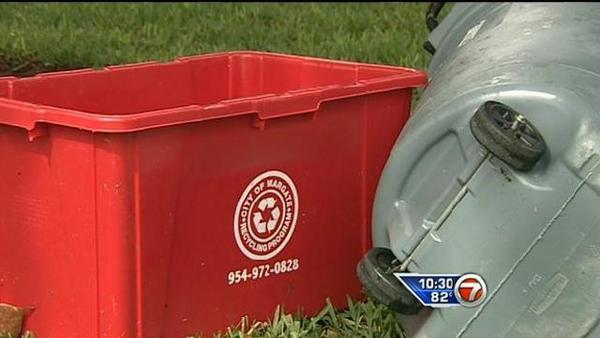 Of course the association doesn’t always make everyone happy, which became clear when Khaleen tried to get a recycling bin.

Khaleen Monaro: “So I called up the city, and they told me they were having some issues with the association.”

In the past, Margate used red recycling bins like this, since they weren’t big enough the city switched to these blue 65 gallon carts, but the Fiesta homeowners board was not happy.

Khaleen Monaro: “They didn’t like the bins. They thought they were too big, and they were working with the city to get a solution.”

Which brings up the first question Howard, can an association block a city or county from handing out these type of recycling carts?

Howard Finkelstein: “Yes, they can control the size and color and location of the recycling bins, but they cannot block a city from handing out some sort of recycling bin.”

The Fiesta board and Margate worked out a compromise, if the residents would sign this letter from the association they could get the new bigger recycling carts. But Khaleen was not happy with the document.

Khaleen Monaro: “This new user agreement subjects the residents to having their bins confiscated, at which point they have to pay the city to get a new bin. Also, it raises the fine from $50 to up to $1,000.”

In other words, the board told the residents, to get a recycling cart you have to sign a document agreeing to keep it on your back patio at all times. If you don’t bring it in from the road on a recycling day within 24 hours you will be fined. Not $50 as in the past, but starting at $100 going up to $1,000. Kahleen told them, I wont sign that.

Khaleen Monaro: “He said, ‘Sign the agreement or you don’t get a bin.'”

Meaning her recycling isn’t picked up and goes in the garbage and Khaleen is a big believer in recycling.

Khaleen Monaro: “I don’t think the city should be holding my garbage bin ransom, you know, contingent on whether I resolve this dispute with the homeowners.”

Khaleen is bothered that the board changed the by laws without letting the residents have a say, and of course seeming to hold the recycling carts hostage to get residents to sign the agreement. So Howard, can a board do that?

Howard Finkelstein: “In this case, no. To change the the bylaws raising the fine from $50 to $100 requires two thirds of the residents to approve it. The board did it on their own, therefore its illegal and cannot be enforced.”

We first spoke to the city of Margate. We were told Fiesta is the only association to complain about the new recycling carts. The association president said they didn’t like the bigger cart because they were afraid they would attract rats.

After telling us the board would not change the fine from $100 to $50, the president emailed us and said they plan to lower the fine this week.

Maybe restoring the fine to $50 will work because right now, it appears the attempt to jack up the fines has convinced many residents it’s too expensive to recycle.

Khaleen Monaro: “And I’ve driven around the community life and I’ve only seen five of the new recycling bins, which indicates to me that residents are kind of slow in taking up the offer to sign away their rights for a garbage bin.”

Patrick Fraser: “Why do boards do things that they are not allowed to do? I mean most of them have lawyers but often boards don’t talk to their lawyers cause that costs money. They think they don’t need legal advice. They think they are doing the right thing of course, many times they are wrong.”

Got a problem you feel is garbage? Ready to toss it out? Contact us, we wont recycle an old answer, we will get an original for you.