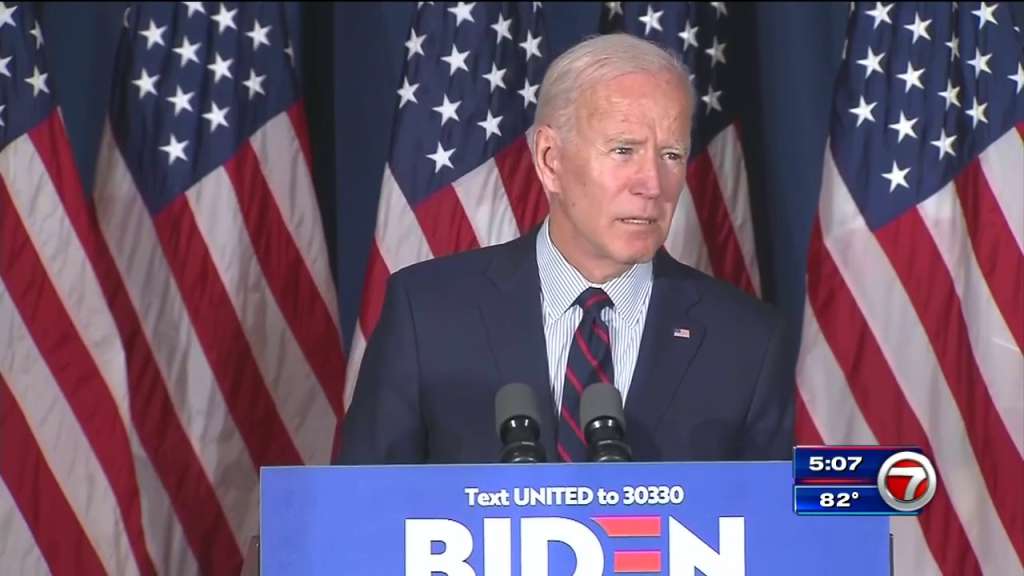 (CNN) — Former Vice President Joe Biden leads President Donald Trump in the polls for a lot of different reasons. One large one is his support from female voters.

Biden is earning a historic amount of support from female voters for a presidential nominee when examining polling over the last 70 years.

Take a look at the most recent live interview polls of registered voters from May and June compiled by The New York Times’ Nate Cohn.

Biden is leading among female registered voters by 59% to 35%, a 25-point margin when the numbers aren’t rounded. That’s a significant increase from his 19-point advantage earlier this year and the 14-point lead Hillary Clinton had in the final 2016 preelection polls of registered voters. Clinton had a 13-point edge with likely female voters.

The only year that comes close to what we see in the polls right now is 1964. That year, Democrat Lyndon Johnson won nationally by 23 points overall, and Gallup had him taking the women’s vote by 24 points. Biden’s doing a point better than Johnson did among female voters, even as he is doing 13 points worse overall. In no other year since 1952 did the Democratic nominee win among female voters by more than 15 points.

(If we look at Republican nominees as well, Richard Nixon won the women’s vote by 24 points in 1972 as he won nationally by 23 points.)

Perhaps what makes Biden more impressive with women is how weak he is with men. He’s seen only a 2-point climb with them from earlier this year and is still losing them to Trump by 6 points. That’s about how Clinton did with them in the final 2016 preelection polling. Clinton trailed by 5 and 7 points among registered voters and likely male voters, respectively.

In fact, the only candidate to win the presidency since 1952 and do as poorly as Biden is doing with male voters right now was Barack Obama in 2012. Obama lost them by 6 points, per Gallup’s tally.

The fact that Biden is leading overall (10 points) by a significantly wider margin than Obama won by (4 points), despite how poorly Biden is doing with men, is another indication of how strong he is with female voters.

When you contrast female and male voters, you see that we could be heading toward a record gender gap. The 31-point difference right now blows past any in past preelection polling. Both 2012 and 2016 featured gaps of around 20 points. The average from 1996 to 2016 was a gap of about 16 points, which is only about half of what we’re seeing in the polling right now.

A gender gap isn’t necessarily good for the Democratic Party. If Biden were winning among women by a point and losing men by 30 points, he’d be down significantly.

Still, you’d rather have women on your side than men for the simple reason that they make up a slightly larger share of voters. Biden’s overall advantage would be about a point less if women and men made up an equal share of the electorate. That doesn’t matter at this moment, but it could if the polls tighten up.

For now, all we can say is if this election were just left up to men, we’d be talking about a clear Trump lead instead of what it is in reality: a big Biden advantage.