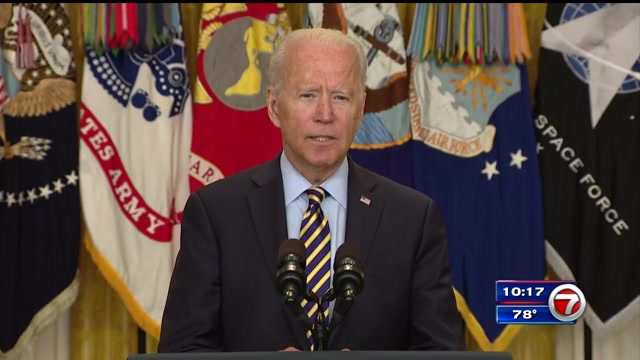 WASHINGTON (AP) — President Joe Biden on Monday ordered the State Department to create a working group to review U.S. remittance policy to ensure that money that Cuban Americans send home makes it directly into the hands of their families without the regime taking a cut.

He also ordered a review of the viability of increasing staff at the U.S. Embassy in Havana. The White House is hopeful that a boost in staffing could help it better facilitate civil society engagement following one of the communist island’s biggest antigovernment demonstrations in recent memory.

The actions were detailed by a senior administration official who spoke on condition of anonymity because the Biden administration hadn’t yet publicly announced the effort.

It comes a little more than a week after thousands of Cubans took to the streets of Havana and other cities across the island to protest food shortages and high prices during the coronavirus crisis. It’s a level of frustration not seen in Cuba in more than 60 years.

Biden is also calling for the administration to work with Congress to identify options to make the internet more accessible on the island. The regime moved to quickly cut off internet access to stop images of the protests from being broadcast to the world. Republican lawmakers, including Sen. Marco Rubio of Florida, have been urging Biden to make free satellite internet access available to dissidents to help them subvert the Cuban government’s effort to stop activists from getting their messages on social media.

The administration will also look to work with international organizations to increase humanitarian assistance, while the Treasury Department’s Office of Foreign Assets Control will explore sanctioning Cuban officials who committed human rights violations against peaceful protesters in Cuba, the official said.

Biden, who has been under congressional pressure to take action, last week called Cuba a “failed state” that was “repressing their citizens.”

But Biden also suggested that taking effective action was complicated.

“There are a number of things that we would consider doing to help the people of Cuba, but it would require a different circumstance or a guarantee that they would not be taken advantage of by the government,” Biden said. “For example, the ability to send remittances back to Cuba. We would not do that now because the fact is it’s highly likely the regime would confiscate those remittances or big chunks of it.”

A dramatic drawdown of embassy personnel from Cuba began in 2017, unrelated to the Trump administration’s antipathy towards President Barack Obama’s rapprochement with the island.

Instead, the removal of staffers from the U.S. Embassy in Havana began in the spring and summer of that year in response to unexplained brain injuries suffered by American diplomats, spies and other government employees posted to the island.

The Trump administration also moved to reverse many of the Obama administration‘s initiatives, reimposing restrictions that had barred direct commercial flights by U.S. carriers to multiple Cuban airports and port calls by U.S. registered cruise ships.

As president Donald Trump also sharply curtailed remittances that Cuban Americans were allowed to send to relatives on the island, barred financial and commercial transactions with most Cuban companies affiliated with the government or military and, in his final days in office, redesignated Cuba a “state sponsor of terrorism,” in part for its support of Venezuelan President Nicolas Maduro.

Biden said as a presidential candidate that he would revert to Obama-era policies that loosened decades of embargo restrictions on Havana, and the political right in the U.S. has accused him of not being supportive enough of Cuban dissidents. Thus far, the Biden administration has said it’s reviewing its Cuba policy and has done little to move away from Trump’s posture toward the communist regime.

Some of the more liberal members of the Democratic Party, most notably Rep. Alexandria Ocasio-Cortez of New York, have criticized the Cuban government but also called on Biden to lift the embargo and argued that the embargo policy is contributing to Cuban suffering.