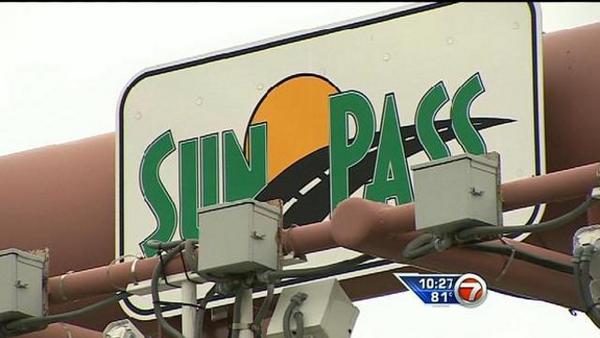 WSVN — Vicki Hatch is a nutritionist, so of course being me I had to see what she has in her refrigerator.

Vicki Hatch: “I have got strawberries and cherries are at the bottom and then I have got my blueberries cause these are powerful antioxidants. Each food serves a purpose. No doubt you have got some Vitamin C.”

Clearly Vicki practices what she preaches … most of the time.

Vicki Hatch: “I do eat pretty well but I can also have a beer and a burger with you and be OK.”

Speaking of beef, Vicki has one with the Miami Dade Expressway Authority.

Vicki Hatch: “One day I got one of these invoices in the mail and I said what’s this?”

The toll by plate invoice showed an SUV driving by the camera.

Vicki Hatch: “And then I looked at it and it was a black Jeep, I drive a white Honda.”

Vicki Hatch: “Once they pull up my number they said, ‘OK I can see this is not yours, I can remove the charge.'”

But it wasn’t a one time mistake. Another bill came for the same black Jeep going thru the toll here on 836. Not once, not twice, at least 10 times.

Vicki Hatch: “I just dont’ want that invoice anymore and that invoice belongs to the person that is passing thru.”

The first three letters of Vickis tag are 821. The first three of the Jeep appears to be 621. You see that, this camera does not and it apparently cant be corrected.

Vicki Hatch: “I have been told they cant, they cant fix it. that’s what I was told.”

But Vicki has two children, her own business to run and doesn’t want to deal with these bills every time this driver does down 836, so she offered to throw out her old tag and pay for a new one.

Meaning each month for a year and a half, Vicki gets the bill for the driver of this black SUV.

Vicki Hatch: “It’s a waste of their time, my time and all the resources, the paper that they sent me.”

Well Howard, if a camera is consistently incorrectly reading a tag over and over and billing the wrong driver, legally is the Expressway Authority required to resolve the problem?

Howard Finkelstein: “Yes, legally yes they do have to resolve the problem and by wiping out the toll each time Vicki calls, the are following the law and resolving the problem. Its inconvenient for her but its all that is legally required to be done.”

I then called the Miami-Dade Expressway Authority and they were very helpful. The problem is exactly what Vicki thought. The cameras aren’t that clear and the software that reads the six sees it as an eight, and so the tolls are assigned to Vicki.

A spokesman Mario Diaz said they have adjusted the software to stop Vicki from getting tolls that are not her’s, and will be upgrading the cameras and the software that reads the tags to stop this.

Also to insure Vicki doesn’t have any more problems, any time a toll comes up in her name it will be sent to the Expressway headquarters where a human will check to make sure it’s her car.

Vicki Hatch: “I am very happy.”

One less headache in Vicki’s busy day. that’s what we like to hear.

Vicki Hatch: “I was really surprised how quickly he was able to get some resolution.”

Patrick Fraser: “Dont give me credit, the Miami-Dade Expressway Authority made it easy, and you know I have noticed in the last year or so that government agencies have changed their attitude and want to get the problems we call them about take care of quickly. It used to be hard to get them to even admit there was an issue, so give them all credit. And by the way, if you have a toll problem with the Expressway Authority their phone number and email contact is on our website at wsvn.com.”

Troubles taking a toll on you ready for the express lane? Contact us, our cameras will clearly show how wonderful you look. Of course, they don’t help Howard and me.