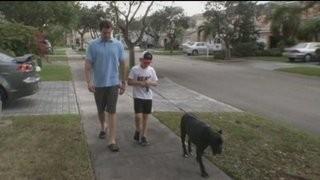 WSVN — Derek and his dog Hannibul have been inseparable since Derek was just three years old.Jason Touhsant: "He's been there the majority of my son's life, and they're best of friends. He's my son's protector."So when Hannibul was diagnosed with cancer a few years ago, his dad wasn't sure how to break the news to his son.Jason Touhsant: "It floors you. You have to deal with the impact yourself, but then you also have to deal with the impact on your child."Vickie Saez is a breeder who lost several of her award-winning French mastiffs to canine lymphoma.Vickie Saez, Pet Loss Counselor, Pawstrong: "I ran into so many people who were experiencing the same thing."So she decided to help others by becoming a pet loss bereavement counselor, and formed an organization called Pawstrong.Vickie Saez: "To help them deal with not just the loss of a pet, but an animal who might have a disease that compromises their quality of life."Like most parents, Jason had concerns about how to tell his son Hannibul was sick.Jason Touhsant: "I really wanted to bring it along from where it was something Derek understood what was going on to as much as a 5-year-old could understand."Vickie says, when you do talk to your child, use terms appropriate for their age. Vickie Saez: "A smaller child is not going to be able to cognitively process the details of a sickness or a death."If the pet needs treatment, explain how that may affect them.Jason Touhsant: "'You can't play with Hannibul the same way that you used to play, we have to take it easy, he's still recovering.'"But whatever you do, Vickie says, be upfront. Don't hide the situation from your kids.Vickie Saez: "Addressing it is the single most important thing you can do for your child."Derek had a lot of questions for his dad when it came to Hannibul's health and how he was feeling.Vickie Saez: "You use that time when the question comes up to say. 'Well, let's write it down, and then let's do some research on it.'"It's been a year since Hannibul's last surgery, and the vet gave him a clean bill of health. Jason says despite the scare, he feels the experience has been an important life lesson for him and his son.Jason Touhsant: "It was a growth process for me as a parent, and it was a growth process for Derek."Vickie adds, if your pet does pass away, don't replace it with another pet right away. Allow you and your kids to go through the grieving process.For a link to the Pawstrong website, log onto wsvn.com.FOR MORE INFORMATION:Pawstrong Animal Cancer Foundation8835 SW 107th Avenue, #336Miami, FL 33176-1411www.pawstrong.orgMiami Veterinary Specialists8601 Sunset DriveMiami, FL 33143Tel: (305) 665-2820 http://www.mvshospital.com