NORTH MIAMI, FLA. (WSVN) - A therapist who works at a group home for the disabled is still in shock after a North Miami Police officer shot him, but according to the Police Union president, that officer may have been aiming for someone else.

Thursday afternoon, the North Miami Police Department released a statement saying that officer has been placed on administrative leave. They have yet to identify the officer but they described him as a 30-year-old Hispanic male who has been with the department for four years.

North Miami Police have not released the officer’s name or an update on their investigation. However, they did say that the State Attorney is now involved with the investigation.

Protesters gathered outside and inside of the North Miami Police Headquarters lobby with signs and questions about how an unarmed man with his hands up could be shot by police. 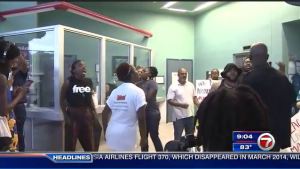 Cellphone video was released Wednesday afternoon showing Charles Kinsey lying on the ground with his hands in the air, telling officers that weapons are not necessary. Police were summoned to the scene by a 911 caller on Monday saying someone was armed and suicidal.

“I still get my hands in the air,” Kinsey said in an interview with 7News from his hospital bed Wednesday, “and I said, ‘I just got shot.’ I’m standing there like, ‘Sir, why did you shoot me?’ and his words to me was, ‘I don’t know.'”

Kinsey was released from the hospital Thursday night.

The Miami-Dade Police Union president said Thursday afternoon that Kinsey did everything right and that the North Miami Police officer was aiming for the patient out of fear that he had a gun and was planning to hurt Kinsey.

“The movement of the white individual looked like he was getting ready to charge a firearm into Mr. Kinsey,” said John Rivera, president of the Miami-Dade County Police Benevolent Association, “and the officer discharged, trying to strike and stop the white male, and unfortunately, he missed.”

Rivera released a statement from the officer that said in part: “I took this job to save lives and help people. I did what I had to do in a split second to accomplish that and hate to hear others paint me as something I’m not.”

“This is a case where a police officer was trying to save Mr. Kinsey’s life, and unfortunately, his shot went astray,” Rivera said.

Rivera also said his thoughts and prayers are with Kinsey.

Many people in the community still have questions about why the officer pulled the trigger.

On Thursday afternoon, North Miami Police Chief Gary C. Eugene and U.S. Congresswoman Frederica Wilson held a press conference regarding the shooting. “We have witness statements that there was a gun,” said Eugene. “We had a 911 call with that same information. However, I want to make it clear there was no gun recovered.”

When Congresswoman Wilson was asked whether better training in mental health issues would have made a difference, she said we can only pray. “That’s the only solution I have,” said Wilson. “As I stand here, when you shoot a man lying on the ground with his hands up explaining to you the situation – and you shoot him anyway – something is not right with that picture, so we, as a district, are in shock.”

Wilson said that seeing the video felt like a nightmare. “Lying on the ground with his hands up, freezing, being rational, and he was still shot,” she said. “If you’re ever stopped by the police — freeze, don’t move. That’s number one on the brochure that we created with the 5000 Role Models, to train them boys. What else could we have told him? What could have saved him from being shot?”

Eugene said that the department has handed over the investigation to FDLE. He declined to take further questions after his statement.

Kinsey’s lawyer, Hilton Napoleon, is outraged. “There’s no justification for shooting an unarmed person who’s talking to you and telling you that they don’t have a gun, and that they’re a mental health counselor,” Napoleon said.

According to Napoleon, the North Miami City leaders are talking to him about a cash settlement. “They want to resolve it relatively fast in a matter of good faith, to let the community know that they take these things seriously,” he said.

The North Miami cellphone video of Kinsey with his hands up has gone viral around the world.

“So we’re pro-police,” Wilson said. “We love the police. We know that when the police breaks down, the country to dissolved, but today, I’m in shock. I am in total shock of what I saw.”

Around 6 p.m., Wednesday, a group called the Circle of Brotherhood stood outside the North Miami Police Department, requesting that police answer questions about what happened and if the officer responsible for shooting his weapon will face charges.

The organization, which Kinsey is a part of, works to solve problems in the community.

Other protests broke out Thursday night in front of the department. “We want the officer fired, charged, convicted,” said protest organizer Valencia Gunder.

The North Miami Police Department has set up a community comments hotline, Thursday. If you’d like to give them a call, the number is 305-547-8644.