MIAMI (WSVN) - A South Florida girl is home from the hospital after, her parents said, a neighbor’s dog bit her in the face.

Fifteen-month-old Jaila Lamote is all stitched up and resting after the ordeal that took her family and neighbors by surprise, Saturday morning.

“She had a big scar right here,” said her mother, Claudia Lamote, referring to the now bandaged wound below the toddler’s swollen left eye.

Jaila also sustained an injury to her upper lip. “She’s young, so it might heal,” said Claudia as she tried to hold back tears.

Surveillance footage captured the tense moments outside the residence in the area of Northwest 21st Avenue and 26th Street. Moments before the attack, Claudia could be seen carrying her daughter into a neighboring unit. The dog, seen sitting near the door, then got up and followed them inside.

“My niece was feeding her, and I was right next to her,” said Claudia. “The dog was nowhere near her. The dog just came. I think she smelled the food, just came and went after her.”

The dog, described by officials as a female brown brindle terrier mix, lunged at Jaila and bit her in the face.

Neighbor Laidy Ducos said her mother, Maria, heard the screams before rushing in to call for help. “The [toddler’s] mom was obviously going nuts, picking up her daughter, trying to clean the blood off her face, screaming,” said Ducos. “That’s when [my mother] grabbed the phone and called 911.”

What unfolded afterwards happened fast. The dog’s owner flagged down an ambulance, and first responders rendered aid as soon as they arrived.

Paramedics took the child to Jackson Memorial Hospital Pediatric Center. Fortunately, her wounds were not life-threatening, and she is expected to be OK.

Emotions ran high outside the home, as two people were captured on video briefly starting to fight. 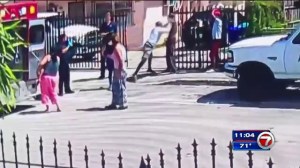 Miami-Dade Animal Services later responded to pull the dog from the home.

“I can’t forgive myself because I wasn’t right there at the right moment,” said Joel Lamote, the girl’s father. “I don’t know what I would do with myself if I lose my daughter like that.”

While Jaila continues to recover, her parents said this is an incident they won’t soon forget. I’m happy that she’s here, but I wish that this never had happened,” said Claudia.

“I never expected that the dog would flip like that to my daughter,” said Joel.

The Lamotes said they had never had an issue with the canine, which was often found roaming around a small patio area in her owner’s home.

The owner had the dog euthanized by Animal Services. “They can be dangerous. They can be a killer,” said Joel.

The toddler’s family has set up a GoFundMe page to help cover medical expenses. If you would like to make a donation, click here.