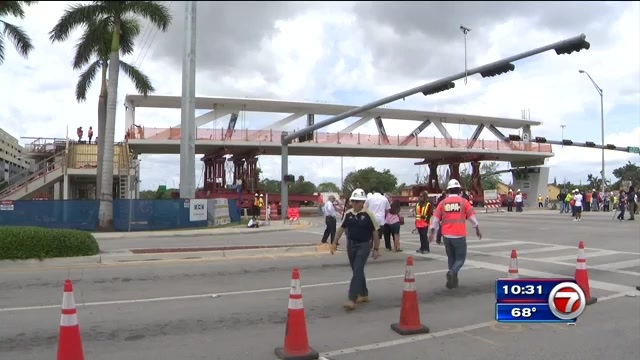 WEST MIAMI-DADE, FLA. (WSVN) - A section of a road in Sweetwater near Florida International University has been shut down all weekend for construction of a new pedestrian bridge to make for a safer crossing for students.

Both directions of Southwest Eighth Street remain closed Sunday, between 107th and 117th avenues. The roadway will reopen Monday at 5 a.m. 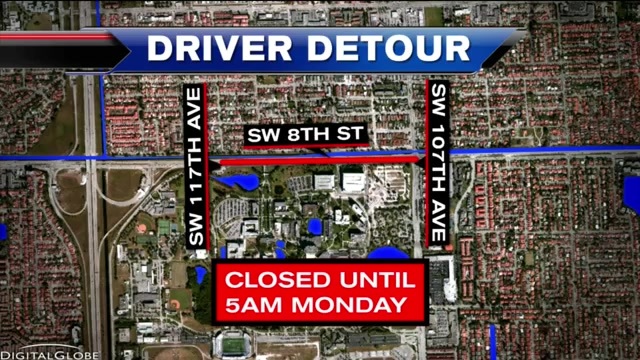 The closure allows crews to move and position a 174-foot section of the new University City Bridge. Students returning from spring break on Monday will be able to use the bridge.

On Saturday, a construction worker involved in the undertaking spoke to 7News. “We built this bridge on the FIU campus over the last six to seven months. This is a design build project,” he said. “What we’re doing today is swinging the bridge from the FIU property across Eighth Street, so the commuter that came home Friday night did not see the bridge. On Monday, when he’s going back to work, he will see the bridge.”

The structure is the first of its kind. It’s built with self-cleaning concrete that, when exposed to sunlight, captures pollutants and turns bright white.

Students will be able to use the new pedestrian bridge connecting the West Miami-Dade campus to the city of Sweetwater beginning January of 2019.