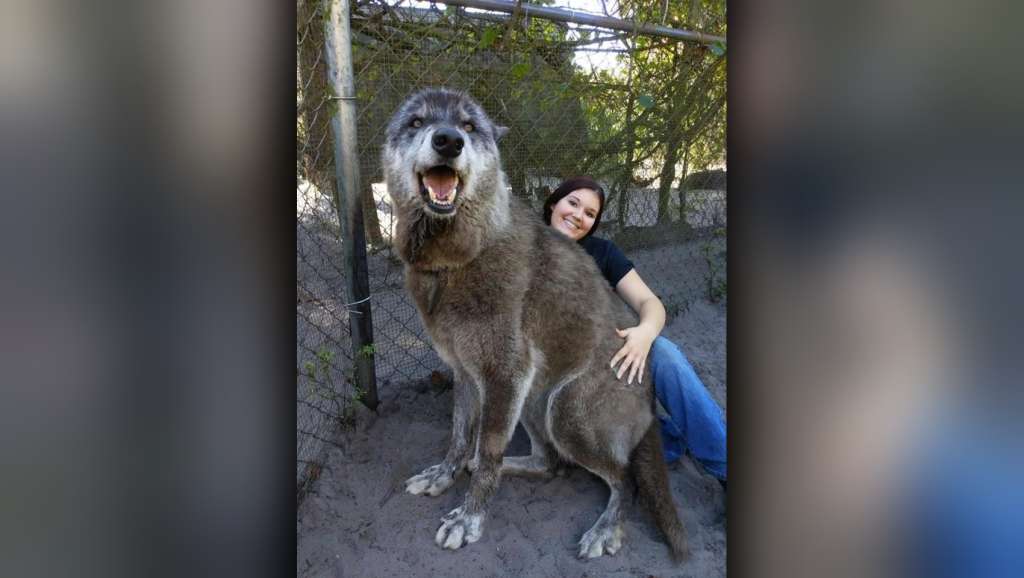 NAPLES, Fla. (WSVN) — A photo of a giant wolfdog sitting next to a woman is blowing minds on the internet.

The Shy Wolf Sanctuary in Naples told Fox 13 that Yuki the wolfdog was brought to a kill shelter when he was 8 months old. His owner had fallen ill with a brain tumor, and Yuki was growing to big to be handled.

Yuki was given a second chance at the Shy Wolf Sanctuary and now, at 12 years old, he has grown into a massive animal. The Sanctuary also discovered that Yuki was 87.5% Gray Wolf, 8.6% Siberian Husky, and 3.9% German Shepherd.

A photo of the wolfdog was posted on social media by volunteer Brittany Allen. Allen is seen sitting down by Yuki, who appears to be almost twice her size.

While Yuki is a large animal and the photo is unedited, Allen did say that the angle of the picture is what made Yuki appear so large and that he is not actually as big as he may seem.

“The face we make when people say Yuki’s picture is Photoshopped … It’s just his fat angle guys. We all have one,” Allen responded in one of the comments on the photo.

While Yuki does appear to be docile in the photo, the sanctuary said he is very unpredictable and has a number of triggers. Volunteers must be able to read his body language and react fast.

Yuki is terminally ill and is not up for adoption. However, interested parties can sponsor him.

The Shy Wolf Sanctuary serves as a refuge for not only wolves and wolfdogs but also other animals like cougars, bobcats and Florida gopher tortoises. For more information on the sanctuary, click here.