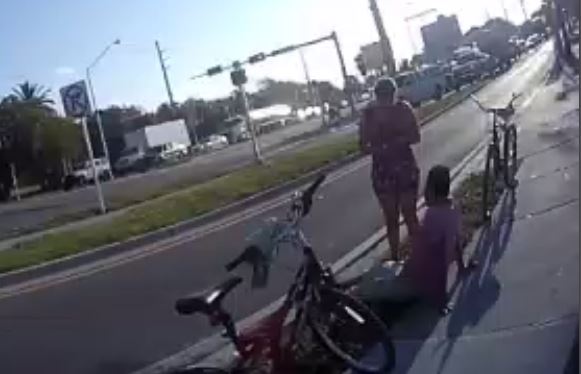 KEY WEST, FLA. (WSVN) - Body camera footage has been released of a Monroe County Sheriff’s Office deputy asking a Honduran immigrant who was hit by a car in Key West whether he was here legally or not.

According to Univision, 31-year-old Marcos Antonio Huete was on his way to work before he was allegedly hit by a pickup truck on April 27. While Huete was lying on a sidewalk next to his bicycle, the deputy arrived and questioned him, which was recorded by the deputy’s body camera.

The deputy could be heard asking, “You illegal? Are you a legal citizen or no? Speak English? You got ID? Passport, visa or what?”

Huete was unable to answer the officer in full sentences due to his limited command of English, so he called his sister, Olga Huete.

The video also shows that an ambulance was called only after a second officer asked Huete in Spanish if he requires medical care.

In the Univision report, Huete said after her brother was discharged from the hospital, they were instructed by an officer to return to the scene.

A Florida Highway Patrol tooper then fined him $75, Huete said, for “causing the accident.” The incident report accused Huete of riding out in front of the pickup truck as it turned right across a crosswalk. The deputy then said the 45-year-old driver was not at fault.

Border Patrol agents allegedly showed up soon after the fine was handed to Huete, asking to see the 31-year-old’s paperwork and suspecting him of being an undocumented immigrant.

According to the Border Patrol, Huete has an outstanding deportation order from 2010 and is being held at Krome Detention Center as arrangements are being made for his removal.

Huete’s situation has garnered attention from executive director of the Florida chapter of the American Civil Liberties Union, Howard Simon, who told Univision, “Asking for immigration status to a person after being hit by a car offends human rights sensitivity and is very counterproductive for effective law enforcement.”