Woman in custody after barricading self in SW Miami-Dade home; husband, 3 children OK 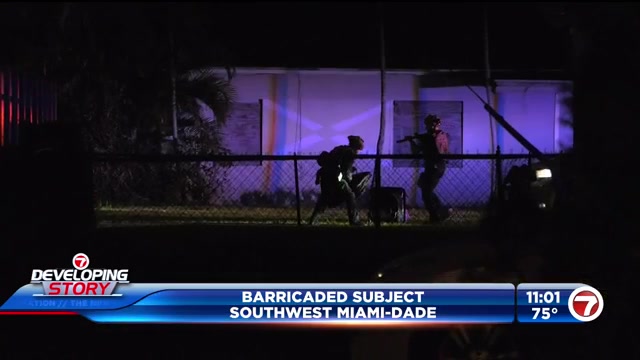 SOUTHWEST MIAMI-DADE, FLA. (WSVN) - A woman had to be transported to a local hospital for a mental health evaluation after she barricaded herself in her Southwest Miami-Dade home for hours during a standoff with police.

Miami-Dade Police officers began negotiating with the woman at around 6:15 p.m., and after about two hours she released her husband and three children unharmed. She, however, would not surrender until the early morning hours.

7News cameras captured a special response team outside of the house, located at 14500 Pierce St. in the Richmond Heights neighborhood, Thursday night. A Miami-Dade Fire Rescue ambulance could also be seen standing by.

Investigators described the woman as mentally unstable. Officers established a dialogue with her and have reached out to her intermittently.

A negotiator used a megaphone to speak to the woman.

“Your baby needs their formula. Your children need to go to bed; tomorrow is a school day. Come on out,” the negotiator said.

The negotiator also said, “Please, come outside. Don’t go back on your word.”

Police said they did not believe she was armed, because that’s what her husband told them, but they were not leaving anything to chance.

According to police, they later found her wearing a bulletproof vest and carrying a firearm case, when they arrived on the scene.