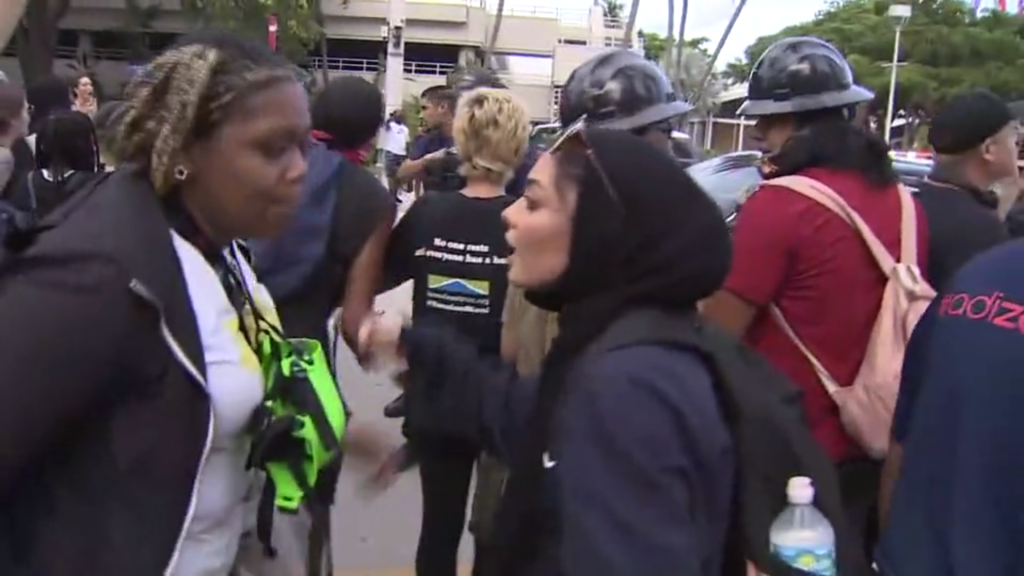 Alaa Massri at a protest.

MIAMI (WSVN) - The Miami-Dade Department of Corrections is at the center of a faith-based controversy after a Muslim woman who was arrested at a downtown Miami protest was forced to remove her head covering for a booking photo.

The arrest of 18-year-old Alaa Massri has drawn national attention after, she claimed, her rights were violated while she was being booked.

Omar Saleh, an attorney for the Council on American Islamic Relations (CAIR), discussed the June 10 incident on Monday.

“Removing the hijab for the booking photo is improper,” he said.

Over the weekend, CAIR publicly condemned the actions of law enforcement, pointing to the removal of Massri’s hijab…

Miami Police took Massri into custody during a protest in the area of Biscayne Boulevard and Northeast Third Street, on the same day statues of Christopher Columbus and Juan Ponce De Leon were vandalized.

7News cameras showed Massri at several intervals during the demonstration as it became more tense.

According to the arrest report, officers who were trying to clear the street said Massri would not move, so they began escorting her.

The arrest report states Massri “punched Officer Corral in the right bicep with a closed fist.”

She was arrested and charged with battery on a police officer, resisting with violence and disorderly conduct. She was then booked into jail.

A spokesperson for Miami-Dade Corrections issued a statement that reads in part, “Arrestees who claim or appear to be of a particular faith are allowed to keep their head covering once it has been searched for contraband and the booking photograph has been taken.”

The statement goes on to say, “We are committed to ensuring that individuals’ faith-based beliefs and practices are respected and will review this incident to ensure compliance with our policies and this commitment.”

However, according to a Change.org petition, Massri was without her hijab for several hours.”

While there is at least one online site collecting money for her legal battle, those representing CAIR said their involvement is aimed at awareness.

“Americans and people in America need to be treated equally and with respect,” said Saleh. “This is really an opportunity, we think, to look back and know how we can move forward together.”

Speaking with 7News on the phone, Massri said she has been advised by attorneys not to make a statement at this time.