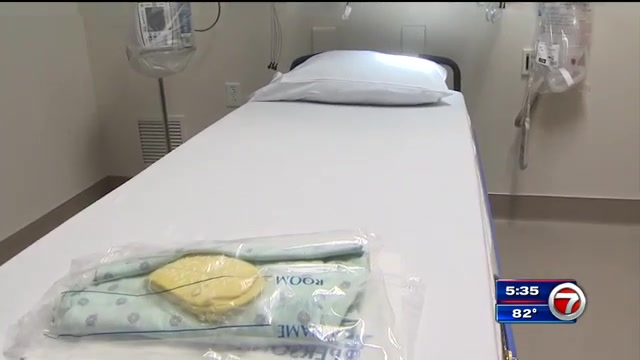 TALLAHASSEE, Fla. (AP) — Florida health officials are deploying three field hospitals statewide as the state’s number of infected with coronavirus jumped by nearly half with possibly two deaths tied to the disease at a Fort Lauderdale nursing home.

Emergency Management Director Jared Moskowitz announced in an email Tuesday night that one field hospital is currently staged in Orlando and can be sent to other areas if needed as the coronavirus pandemic spreads.

Another is on its way to Broward County, which has 80 infected people, more than a quarter of the state’s confirmed cases. Mobile COVID-19 testing also is being implemented in Broward, and the National Guard has been deployed to assist there.

The third field hospital will be set up in Ocala, north of Orlando, and moved elsewhere as needed.

State officials said they are responding quickly to cases at assisted living communities in an attempt to prevent an outbreak similar to one that occurred at a Seattle-area nursing home, which has been linked to more than two dozen COVID-19 deaths.

“If a cluster of confirmed cases were to be discovered in Florida, the department would move quickly to engage with and isolate any infected individuals to prevent further spread,” said Alberto Moscoso, the state health department’s spokesman.

Five firefighters and a police officer are self-isolating after they had contact with residents at Fort Lauderdale’s Atria Willow Wood community, where one person died of the disease and another death is being tested.

In Jacksonville, city officials said four of its 13 infections were linked to a senior living facility, Camelia at Deerwood. Management there said it is working with investigators.

Garay Holland was on his way from Bee Branch, Arkansas, on Wednesday to visit his 97-year-old mother at the Jacksonville retirement community.

“I might just stand outside her window and wave, and talking to her on the cellphone. At least she’ll know I got here as quick as I could,” said Holland, 78.

State and local officials have told people to self-isolate, have shuttered the state’s bars and limited restaurant capacity and hours. Walt Disney World, Universal-Orlando Resort and other theme parks are closed, as are some beaches. The Florida Supreme Court said Wednesday it would not hear cases until June. Houses of worship have called off services, including the Catholic churches in the Miami and Tampa areas, which made announcements Wednesday. The city of Sunrise ordered the closure of Sawgrass Mills Mall near Fort Lauderdale, one of the nation’s largest and a major attraction for South American tourists.

Still, some tourists and locals flocked to spots like Clearwater Beach near Tampa, which was open and packed Wednesday beneath clear, sunny skies — although most groups did seem to be sitting at least six feet (2 meters) apart from other clusters of people.

Sarah Kelley, a St. Louis grocery store section manager, agreed that visiting the beach with her two teenage sons may not have been the best idea. “It is a great festering Petri dish,” she said. But with everyone trying to stay apart, she and her sons took the risk and even went inside a surf shop.

“We are trying not to touch anything,” she said.

This coronavirus causes only mild or moderate symptoms, such as fever and cough, for most people, but older adults and those with existing health problems can develop severe complications, including pneumonia. According to the World Health Organization, people with mild illness recover in about two weeks, while those with more severe illness may take three to six weeks to recover.