Florida Gov. Rick Scott and newly-appointed leader of the Department of Housing and Urban Development Ben Carson were at the event in Pompano Beach that celebrated the nine-acre, 77-home site. 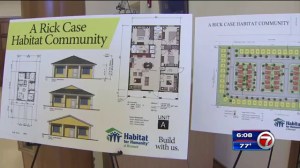 “I’m happy to be blessed like this,” said one woman.

Several children also expressed their excitement, saying in unison, “We got a place to play.”

It is the largest project ever for Habitat for Humanity of Broward County.

Carson said the homes represent the kind of endeavor that benefit the community as a whole. “What’s truly delightful here is that you have so many people coming together to create something that works for some who have been disadvantaged,” he said. “You look at the wealth and talent of this country. If we’re willing to voluntarily lend a helping hand and create an environment, that helps everybody.”

One family who helped make the Pompano Beach project a reality were car dealership owners Rick and Rita Case, who donated $500,000. “We’re hoping that this sets an example for other people in our community,” said Rick Case, “not only in Broward County, but all of Florida to step up and do something like this. Affordable housing is so important nowadays, and Habitat for Humanity is a huge part of that.”

7News owner Ed Ansin was also a large part of how the project began due to many years of involvement with Habitat for Humanity.

Officials said it took several years to purchase the vast space, one acre at a time.

Future homeowners and Habitat volunteers will soon begin working together to build the 77 residences. “In the course of building the community, probably over 1,000 [people], I’m sure,” said Habitat of Broward Chairman Bill Feinberg.

Donations from the Cases and others, including WSVN, helped clear one of the toughest obstacles: finding property to build on. “It’s becoming less and less affordable. That drives prices up, and so we’re really excited to see so many people coming together to make this possible,” said Habitat of Broward CEO Jonathan Reckford.

Construction is scheduled to begin near the Hopewell Missionary Church, located at 890 N.W. 15th St., in the fall. The first families are expected to move into their new homes next year.

WSVN is a proud sponsor of Habitat for Humanity. If you’d like to contact them, check out the links below: