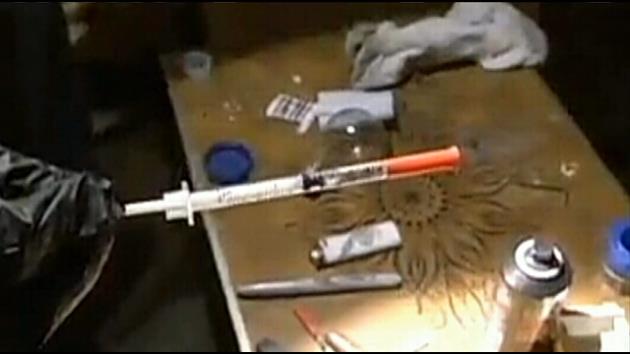 In headlines, it’s been called the “zombie drug,” a “nightmare,” and “cannibal heroin.”

One look at how it ravages a person’s skin, and you can see why. Its name is Krokodil, and it can be deadly.

Experts say Krokodil is more potent, but cheaper, than heroin, because the drug is cut with gasoline and paint thinner. As the name suggests, its use can turn skin black, green and scaly, like a crocodile. In the worst cases, as these YouTube videos show, an addict can develop gangrene and lose flesh.

The Florida Poison Information Center Network tells us there have been calls about two possible cases in Florida this year. One was in North Florida in January, and the most recent, just last week, was from a doctor concerned about a South Florida patient.

The physician reported, “A case of severe tissue damage sustained from injecting what the patient thought was heroin. However, unless the drug can be tested in a lab, cases of Krokodil cannot be confirmed.”

But news of Krokodil use in the U.S. has been lighting up the Internet, with suspected cases in Utah, Arizona and Illinois.

Dr. Abhin Singla: “So literally, when I walked in the room, all you could smell was rotting flesh.”

This doctor at a hospital near Chicago treated patients believed to have injected Krokodil.

Amber Neitzel: “It almost starts out, it looks like I got burned with a cigarette. It starts out like purple, and then it goes into a blister.”

Sisters Amber and Angie Neitzel say they are heroin addicts, and did not realize they bought Krokodil instead.

Angie Neitzel: “I have to go see the infectious disease doctors in two weeks, and in two weeks we are going to decide how far it’s progressed, and they are going to have to wind up doing skin-grafting in the end.”

Carmel Cafiero: “After one glance at the gruesome pictures, you may be wondering, why would someone in their right-mind knowingly try Krokodil? The answer can be summed up in one word: desperation.”

Ira Levy: “I believe it attracts people that are really at the end of the road.”

Ira Levy with Sunrise Detox in Fort Lauderdale is a recovering heroin addict himself. He says none of their patients have used Krokodil, but a few have heard of it. He says there’s a mindset non-addicts can’t comprehend.

Ira Levy: “The high. You are so desperate for that high, physically and emotionally, that you’ll go to any length, and it’s the old saying, you know, ‘it won’t happen to me,’ you know, it’s not going to happen to me.”

There is growing concern from those on the front line that this toxic drug could spread across the country.

Jack Riley, DEA: “I think this goes to the heart of how vicious drug trafficking is in the United States.”

7News spoke by phone to the special agent in charge of the Drug Enforcement Administration out of Chicago. He calls the agency’s investigation of Krokodil the highest priority.

Jack Riley, DEA: “Until we actually get our hands on the people that are putting this on the street and seize some of the purported drugs, and test it, we really don’t have any idea of if it’s actually here or not.”

But if it is here, it may only be a matter of time before Krokodil spreads on the streets of South Florida. Carmel Cafiero, 7News.

For information on how to find a licensed drug treatment program:
Substance Abuse and Mental Health Services Administration
1-800-662-HELP(4357)
http://www.samhsa.gov/