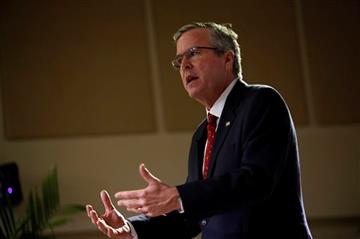 LYNCHBURG, Va. (AP) — Former Florida Gov. Jeb Bush on Saturday condemned the Obama administration’s use of “coercive federal power” to limit religious freedom as he courted Christian conservatives at a Liberty University commencement ahead of a likely presidential run.

Charging that “the Christian voice” isn’t heard enough in the world, the Republican White House prospect lashed out at the Democratic president’s administration for “demanding obedience in complete disregard of religious conscience.”

“What should be easy calls in favor of religious freedom have instead become an aggressive stance against it,” Bush told an estimated 34,000 gathered for a graduation ceremony.

The ceremony was held inside a rural Virginia football stadium at Liberty University, an institution founded by the late conservative culture warrior, Rev. Jerry Falwell.

“Somebody here is being small-minded and intolerant, and it sure isn’t the nuns, ministers, and laymen and women who ask only to live and practice their faith,” he said.

All have aggressively condemned Obama’s health care overhaul which requires some religion-affiliated organizations to provide health insurance for employees that includes birth control. The measure is among several examples of what Republicans charge is Obama’s attack on religious liberty.

“How strange, in our own time, to hear Christianity spoken of as some sort of backward and oppressive force,” Bush said. “Your generation is bringing the Christian voice to where it always is needed, and sometimes isn’t heard enough.”

And in a reminder that his path to the presidency depends upon moderate and independents perhaps as much as conservatives, Bush concluded his remarks with a message for non-Christians.

“In my experience, at least, you generally find the same good instincts, fair-mindedness, and easygoing spirit among Americans of every type — including, of course, the many who belong to no church at all,” he said.

“Jeb Bush will not win over any Virginia voters with his close-minded pandering to the right wing,” said Morgan Finkelstein, spokesman for the Democratic Party of Virginia. “By supporting the Indiana discrimination law and attacking women’s reproductive rights, Bush places himself firmly at odds with Virginia values.”