In Iowa, Clinton lays out tenets of 2016 campaign 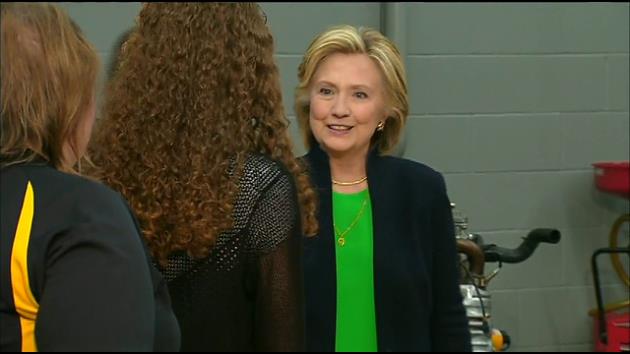 MONTICELLO, Iowa (AP) — Hillary Rodham Clinton laid out the early cornerstones of her 2016 presidential campaign Tuesday, casting herself as a “champion” for struggling Americans and embracing economic and good-government policies promoted by liberal Democrats.

“I think it’s fair to say that as you look across the country the deck is still stacked in favor of those already at the top,” said Clinton, seated at a table with students and teachers at a community college in rural Iowa in her first formal public event since returning to presidential politics. “There’s something wrong with that.”

Clinton said she would focus her campaign for the Democratic nomination on four broad areas, listing the need to build “the economy of tomorrow, not yesterday,” strengthen families and communities, fix dysfunctional government while addressing ways of getting “unaccountable money out of the system,” and protect national security.

“We’ve got to figure out in our country how to get back on the right track,” Clinton said at a branch of Kirkwood Community College. “I’m running for president because Americans and their families need a champion and I want to be that champion.”

Clinton is facing pressure from the liberal wing of her party to make tackling economic inequality a central theme of her new candidacy. And she picked up on that, saying there is “something wrong” when hedge fund managers pay lower tax rates than typical workers and when students and their families are forced into debt to pay for education and skills training.

Although she is running in what is expected to be the most expensive election in history, Clinton embraced the idea of a constitutional amendment, if that’s what it takes, to address the Supreme Court decision removing campaign-finance obstacles for big-money interests.

Clinton is opening her campaign with small events such as the community college meeting and leaving big rallies for later.

Fresh from a two-day road trip from New York, Clinton visited a coffee ship in the Mississippi River town of LeClaire in the morning.

Her 2016 debut is reminiscent of the “listening tour” that opened her 1999 campaign for a New York Senate seat, when she ventured into small upstate towns to convene meetings with voters and local leaders.

In Iowa, Clinton aims to overcome her disappointing third-place finish in the 2008 caucuses.

Her events Tuesday and Wednesday focus heavily on pocketbook economic issues in small-town Iowa, and Clinton was expected to connect with local officials, community leaders and Democratic activists.

At the LeClaire coffee shop earlier she ordered a Masala chai and a Carmellow latte, along with some water with lemon, and chatted with patrons and Mayor Bob Scannell, an independent. “I always vote for the person who I think will do best for the country, and she has my vote,” he said.

Clinton is taking a low-key approach to raising money for now, forgoing the celebrity-studded fundraisers that marked her husband’s presidency, as well as the high-dollar private events put on this year by former Florida Gov. Jeb Bush, a potential GOP rival.

Instead, Clinton’s initial appeals for money will be for small-dollar donations collected over the Internet instead of in swanky fundraising blowouts in New York, Los Angeles and Silicon Valley.

Advisers have set a modest goal of raising $100 million for the primary campaign and will not initially accept donations for the general election.

“Everyone knows that over time Hillary Clinton will raise enough to be competitive,” said Tom Nides, a top Wall Street supporter and former State Department adviser to Clinton. “Her objective is not to raise money to prove that she can. It’s to build the grassroots organization.”