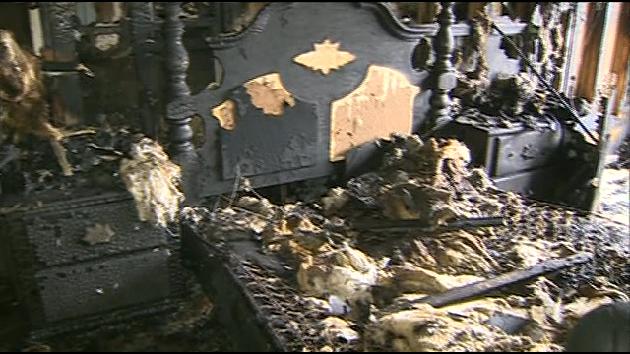 SWEETWATER, Fla. (WSVN) — A fire did serious damage to a mobile home in Sweetwater, and now a family has been left with no place to call home.

Fumero lived at the home with his parents and grandmother, a home his mother owned for more than 20 years.

He said the fire caused the family to lose a lifetime of memories. “As of right now, I’m just thinking about what’s burned inside, memories. That’s the closet that was burning and where all the photos and all that good stuff was at.”

Fumero says he was awakened by the smoke at around 3 a.m. on Tuesday. “I heard some rustling coming from the room next door, and I go outside, and there is a fire in the guest room.”

Fumero said he got everyone out just before the house went up in flames. “I got up and started waking everyone up. I go outside, and I see my grandmother is still inside. So, I go back inside to get her out.” He added, “It took over a minute to get out of the house because I couldn’t see a thing.”

After everyone in the family got out, they sat outside in the dark for hours with just the clothes on their backs as firefighters worked to put out the fast-moving fire.

Miami-Dade Fire Rescue Capt. Miguel Yanes said, “There was heavy fire, heavy smoke. It was difficult to locate the fire. We were a couple minutes away from pulling out, but we stayed inside, and we ended up knocking the main body of the fire.”

Now the family is praying and thanking God to be alive, but also for the strength to start over. “Trying not to think about what could have happened,” said Fumero.

Police and fire crews returned to the home on Tuesday afternoon due to a flare up.

Although no one was injured, the family said they have no clue what they are going to do next.

The cause of the fire remains under investigation.