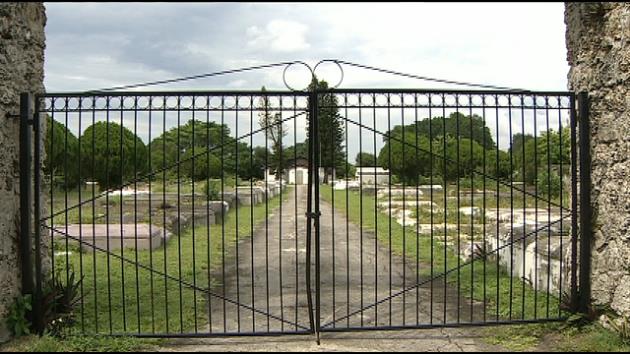 WSVN — February is Black History Month, and a site filled with black history, the final resting place for a who’s who of prominent black South Floridians, is in Miami. Also resting there are blacks born into slavery, but good luck finding many of their graves. And even worse, part of the cemetery may be sold to pay back taxes owed on the property. What is going on there? Here is Patrick Fraser with his report, “Dying Cemetery.”

B.J. Chisvar: “You have Gwen Cherry over here.”

B.J. Chisvar: “The Rolles, the Bullards, the who’s who in the black community.”

Then you might care about where they are buried.

You might want to see their gravesites, but it’s not easy.

Gloria Fisher: “That’s a shame for God. Something really needs to be done right here about that grave.”

From the air, you can see that Lincoln Memorial Park covers 20 acres in Miami. It was once a stunning sight, 1,000 concrete tombs stacked side by side, inches apart.

Melvin Henderson: “Because I couldn’t get in.”

Melvin Henderson called me after he tried to visit his wife’s grave and discovered what neighbors have complained about. Not only is Lincoln Memorial usually locked; it’s an eyesore.

Serena Cooper: “There is a lot of rodents coming out of there. Rats, roaches, snakes, lizards, spiders.”

Beginning in the 1920s, the cemetery was one of the few places where blacks could be buried.

Jessica Williams: “This property, it’s hallowed ground. This is an historic landmark.”

I tracked down the owner of the cemetery, Elyn Johnson, who inherited it from her godfather in the 1950’s. With 1,000 tombs, the cemetery is full, but the state of Florida considers it abandoned, and with no trust fund, no money coming in, Elyn is too old and too broke to maintain it.

But her niece, Jessica Williams, offered to unlock the gates so Melvin could try to find his wife, Willa Mae.

Melvin Henderson: “I don’t think I will be able to walk over these graves there.”

Also there that day was B.J. Chisvar, a former Army veteran who heard about the abandoned cemetery and was heartbroken.

B.J. Chisvar: “People born in the 1800s worked hard just like every other American. Good people. There’s no reason to forget them.”

Elyn Johnson had kept a log of every person buried here since 1924. Willa Mae’s name, buried in 1969, was there. Melvin showed us the general area.

Melvin Henderson: “That one looked like it. It’s right there.”

But look. Hundreds of tombs just above the ground are under a couple of feet of thick vines and weeds. I can dig down, pull it back, but even after you find the tomb, the vegetation has destroyed the nameplates and the letters of the names.

We looked for Willa Mae’s gravesite. We couldn’t find it.

Melvin Henderson: “I tell you, this is terrible.”

Before we left, B.J. promised Melvin he would try to get some help to clear this 20-acre site to find Willa Mae.

B.J. Chisvar: “Something we learned in the Army is that you never stop serving.”

Three months later, B.J. and Jessica called me and told me, “Come back, and bring Mr. Henderson.”

B.J. Chisvar: “There she is. There’s your beloved wife.”

Melvin had not been here in years. Covered by weeds and vines, part of Willa Mae’s name was gone, but a group of Miami-Dade school bus drivers had heard about the run down cemetery and came out to help.

Felicia Johnson: “I kept crossing over Mrs. Henderson, and I never stopped here. I kept going to other locations. Something told me to stop and look. I pulled over some brush and her name was just sticking right out at me.”

After six months of work, the small group of volunteers has cleared a portion of Lincoln Memorial, but to restore and reopen the cemetery, they need a lot more help. So we started contacting prominent black politicians and community leaders. The response?

And its now getting urgent. Part of the cemetery may be auctioned off since $1,900 dollars in property taxes have not been paid.

B.J. and Jessica have started a foundation to finish clearing Lincoln Memorial, to reopen it, because to quote a prominent black man, they have a dream.

Jessica Williams: “The community itself can benefit from it. People of all races, just come in and just go on a tour and just learn about the people that are buried here.”

This is the history of the black community of South Florida. Notice you don’t see many tombstones on the graves. There is a historical reason. It’s called hatred.

B.J. Chisvar: “There were no headstones originally because the very powerful Ku Klux Klan of Dade County did not believe that African-Americans deserved Christian burials.”

George Butler’s family bravely told the KKK in 1924 to shove it, and put up a headstone.

February is Black History Month. This is black history. February will end, but Lincoln Memorial should not be a dying cemetery.

“Gofundme.com”
Under “Save Lincoln Memorial Park” to accept online donations