Driver dies after Jeep crashes into Brightline train in Hollywood 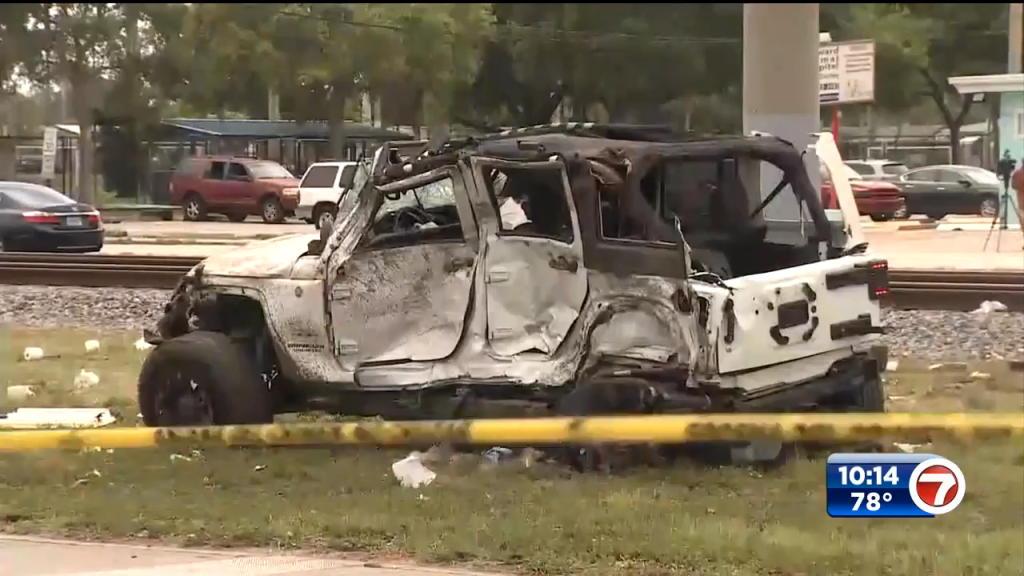 HOLLYWOOD, FLA. (WSVN) - One person has died after their Jeep crashed into a Brightline train in Hollywood.

The collision happened near the intersection of Garfield Street and North Dixie Highway.

“When the train come in, the Jeep, I only hear the hit,” said Nico, a witness.

“They see the signs, they see the barriers down, and apparently the guy tried to do a zig-zag to get around the barriers,” said Yacob Nabo, a witness. “Why would he do that? You can see the train coming. He was traveling in the same direction as the train, so he knows the train is coming.”

Tuesday afternoon, according to Brightline, the driver drove around the gates to get across the tracks, and that’s when he was hit. The passengers on the train were OK.

“I rushed out, and I saw the car was on its side, and they were shouting, you know, the guy under the vehicle, so they pushed. It was a lot of people. There was maybe 20 people around, so they pushed the vehicle away from the guy. They tried to revive him,” said Nabo.

According to police, the driver has been identified as 52-year-old Maher Soua.

Jacob Bresnahan tried to do the same thing, based on surveillance video. It was 5:30 a.m. Monday. The truck slows, swerves to go around the gates, the train then comes to view. The truck was split in half, and the father was killed.

“Right here in this area, within the last year or so, we’ve had at least three accidents, you know, train accidents,” said Montez Lynette, who lives nearby. “People trying to beat the trains. You just, you just can’t do it. Simply just cannot do it.”

Brightline is trying to spread the word, saying to never drive around the gates and to never try and beat a train, as these are active railroad tracks with fast trains approaching in both directions.

“I wanted to let people know that they need to take this serious,” said Hollywood Police Department spokesperson Christian Lata. “The train is hundreds of tons of pounds. You’re not gonna win if you crash against the train, and to please abide by all the rules of the road. We don’t need anymore of these incidents that can be prevented.”

According to Hollywood Police, the driver of the Jeep was transported to Memorial Regional Hospital as a trauma patient. However, shortly after 5 p.m., officials said the driver was pronounced dead at the hospital.

The Brightline train was traveling southbound at the time of the collision. The train only sustained minor front-end damage.

The train and its passengers were tied up for some time. They brought in another train to remove those passengers to take them to their next destination.

There have been more than 60 deaths with Brightline trains since 2017.

Brightline hopes to get the feds involved to possibly change the way some of these intersections are built so that there are more warnings and crossings for drivers.

They are also telling drivers to stop, as they’re not going to beat the train.