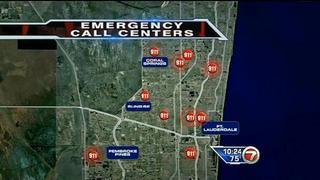 WSVN — Dispatcher: "911, what is the address of your emergency?"

A call to 911 can be a matter of life and death in an emergency. We expect help to be sent right away, but in Broward County there are problems that could cause deadly delays.

Dispatcher: "Hold on, let me transfer you to Lauderhill."

There is a patchwork of 911 emergency call centers in Broward — some operated by cities, some by the county — and when you call, you may or may not get connected to the one that can send immediate help. That's because these days, the majority of emergency calls are placed from cell phones. The location of the nearest cell phone tower dictates where a 911 call goes, not the location of the caller.

Dispatcher 2: "Plantation, this is Sunrise with a transfer."

The confusion was clear recently when a couple being attacked and followed in a road rage incident kept getting switched from one city to another.

Dispatcher: "OK, ma'am, are you in the City of Sunrise?

Caller: "Gosh darn it, don't you know where I'm at? I'm giving you the addresses."

She spoke with three different dispatchers as precious minutes ticked by.

Caller: "I can't believe that they wouldn't have dispatched this and gotten some help to us by now. I've been on the phone for 4 minutes."

Despite the ordeal, the couple was OK. Years ago, another cell phone caller wasn't as fortunate. She was shot and killed in the parking lot of the Plantation Police Department after her 911 call went to the wrong city.

Mayor Mike Ryan: "We are causing delays every day in our 911 system because of cell phone calls. They go to centers that can't send help. We know this. The county commission knows this. We need to do better for our residents."

Sunrise Mayor Mike Ryan says, not only is the current system flawed, he says his residents are paying twice for 911 service. City taxes pay to operate the Sunrise center, but since residents also pay county taxes, their money is also being used to pay for BSO 911 services. Ryan says it's not fair.

Mayor Mike Ryan: "It's estimated to be about $19 or $20 million a year, and it's probably been going on for a decade or more."

Pembroke Pines is also going after the county on the same issue.

Mayor Mike Ryan: "We need somebody to actually look at this and tell us. Have we been double-taxed? Has there been gross mismanagement on the county's side, and what do we do to correct this going forward?"

Carmel Cafiero: "Mayor Ryan has asked Broward's inspector general to investigate how the county has handled the money. We're told that request is being reviewed."

Dispatcher: "Reassure her that help is on the way."

And while money matters, the bigger issue is public safety.

Commissioner Lois Wexler: "If you live on a border of a city and you call 911, you better keep your fingers crossed that your call got to where you hope it went to."

Carmel Cafiero: "So who is responsible for the fact that we have to do that?"

Commissioner Lois Wexler: "I believe the county is."

Mayor Mike Ryan: "I think the residents really need to stand up and demand that we regionalize this service, and that we finally break the chaos that's been going on in the funding, and eliminate the delays in these 911 calls."

So far the county commission has not been able to agree on how to pay for a countywide system. This isn't the first time the issue has come up. It was first recommended in 1984, 29 years ago.