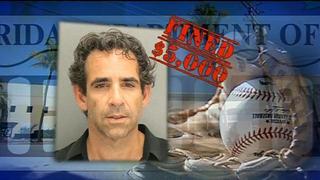 WSVN — The Florida Department of Health determined Anthony Bosch, the man at the center of the baseball doping scandal, was acting as a doctor without a license and fined him $5,000.

His clinic was closed at the time, but 7News has learned a cover letter and a one-page citation was all the state sent to local prosecutors.

Ed Griffith, Miami-Dade State Attorney’s Office: “We had been in contact with them, I believe in May, asking if they had information, please send it to us so we could evaluate possible criminality as part of any investigation that might be ongoing.”

But according to spokesman Ed Griffith, the State Attorney’s Office got nothing more from the Department of Health.

Carmel Cafiero: “Did they give you any information on the statements they took from former patients?”

Ed Griffith: “No, no, we have not received anything beyond the original notice.”

I was the first to give them the full 86-page report detailing the Department of Health case against Bosch. We obtained it through a public records request.

Carmel Cafiero: “So to have a reporter have to give this to you as opposed to the state, what do you think of that?”

Included in the report, sworn statements from three patients who say they were treated by Bosch. One patient, believed to be the Biogenesis whistle-blower, told an investigator he was personally injected by Bosch. Another patient referred to him as “Dr. Bosch” and told investigators Bosch provided him “vitamins and daily shots … so I could inject myself.” And a woman wrote that her husband “became so violent” after taking injections supplied by Bosch, “he attacked me with a knife.”

Carmel Cafiero: “What do you think of a state agency operating like this?”

The warning signs may have been there for quite some time. 7News has also learned the State Health Department had Bosch on its radar years ago. In 2011, it investigated a complaint that Bosch was acting as a doctor.

The state investigator reports he was told it was a “marketing business which generates referrals to medical offices for weight loss and anti-aging.” The case was closed with no action. Meanwhile, Bosch’s clinic operation is now the subject of a federal investigation.